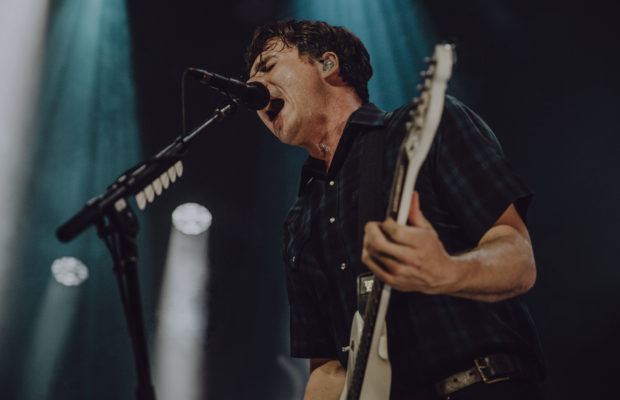 After what seemed like the longest winter yet, summer has finally arrived in Brooklyn. What better way to kick off the start of summer than reliving your ansty middle and high school days by going to a Jimmy Eat World concert? That’s exactly what I did on Thursday night as I squeezed into a completely sold out Brooklyn Steel to see one of my favorite bands perform live. Opening the show was Australian-based indie rocker Alex Lahey. I personally find that it is the best feeling in the world when you go to a show for a headliner, but simultaneously are just as big a fan of the opener. It’s like a double win! Lahey and band graced the stage shortly after 8pm and without any introduction, lunged into “Love You Like A Brother”, the title track off her debut album. When the chorus hit, it was clear that I was not the only Alex Lahey fan in the crowd. Despite the short set time of just a meet thirty minutes or so, Lahey commanded the entire venue, attracting individuals schmoozing in the bar area to come closer to the stage. By the end of Lahey’s set, the floor was packed the brim and everyone was waiting for the main act to begin.

The curtains covering Jimmy Eat World’s instruments were removed and cheers erupted, we were getting closer to the big show. Massive street lights were rolled out into the four corners of the stage and a Jimmy Eat World banner that stretched across the stage was unveiled. And right on queue, at 9pm sharp, the lights dimmed and the band entered the stage. Their set began with an effervescent performance of “Sure and Certain”, swiftly transitioning into “I Will Steal You Back.”

Having Thursday nights show be the first time I’ve seen Jimmy Eat World live, I had no predisposed expectations and that is always the best part of shows. For a band that released their biggest hit “The Middle” seventeen years ago, the energy within Brooklyn Steel that night was at an all time high. The band played a lengthy hour and a half show the consisted of 24 songs, including a three song encore. One of the largest challenges for bands that have been around for as long as Jimmy Eat World have been around, is making sure that their entire discography is hit in a single performance — well, obviously not their entire discography, but making sure they hit every era of the bands existence.

For many bands that have existed for over a decade, there becomes a struggle to stay relevant and Jimmy Eat World’s performance on Thursday night proved that they have successfully dodged the threat of irrelevance. Their show was at maximum energy throughout the entire night — never dying down for a second. It was the supremely perfect way to ring in the summer season.