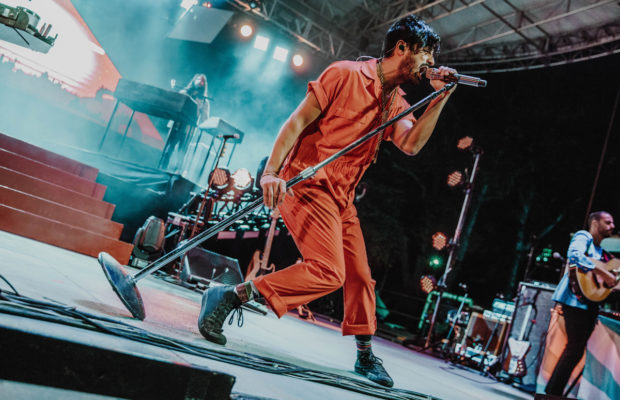 The mid-afternoon slump had hit Central Park on Wednesday at around 4pm. The heat was rising and little droplets of rain began to hit the pavement. People in the park began to pack up their belongings and head for shelter from the dense, wet rain but not those fans outside of Summerstage who were waiting for the concert of a lifetime. Young The Giant was bringing Cold War Kids and Joywave along with them to play a nearly sold out show in Central Parks beautiful outdoor venue as a sort of bittersweet end to summer. By the grace of the music gods, the rain stopped just as the doors opened and the crowd began to flow.

Joywave were playing a hometown show — of sorts. Their home base located in Rochester, the band had frequented the city a number of times in the recent past. While Joywave was set to play a brief 30 minute set, they truly made the best of their time with minimal stage banter, giving the fans what they wanted: the music. Now, this wasn’t my first time seeing Joywave live, but as cliche as it is to say it — they honestly get better every time. They began their set with the hold hit “Now” and played songs new and old including “Little Lies You’re Told” and “Destruction” before concluding with their same final song “Tongues”. The energy of the band is always at a level higher than anyone I’ve seen before but it is particular to note the passion of drummer, Paul Brenner, as he smashed the kick drum with his purple locks flowing in the wind.

As the clock struck 6:45, Long Beach, California, natives Cold War Kids took the stage. CWK have been one of my favorite bands for a pretty long time — let’s just say Miracle Mile always gets me feeling some type of way so when I went to LA for the first time and walked on Miracle Mile I was giddy — but I’ve never gotten the chance to see them until now. The band was just as good as I expected them to be, playing a lengthy hour long set that included songs both new and old like “All This Could Be Yours”, “Hang Me Up To Dry”, and “Mexican Dogs” all before spiraling into a distinctly Cold War Kids rendition of Rihanna’s “Love on the Brain”. Just when you thought things couldn’t get any better… Young The Giant arrived.

With a flower laced between the strings of his guitar, Jacob Tilley graced stage left and the rest of the band members followed. A montage of songs about America drifted through the speakers as the lights lifted and lead singer, Sameer Gadhia climbed atop the riser in center stage. “Amerika” off the bands most recent album was the show opener before diving head first into fancy moves that included plenty of hip shaking on Gadhia’s part — who knew an orange jumpsuit could look so good? I think everyone in the venue can agree with me that they wished they could see Young the Giant play until the sun came up but with Summerstage’s curfew, unfortunately, the night had to end at some point. However, until then the band made full use of their 75 minute set playing songs that spanned across their entire musical careers including the hit “Cough Syrup” followed by acoustic renditions of “Strings” and “Firelight”, before plunging into the latter half of their set.

The night was still young in Central Park as the band began to wrap up their set with their three song encore which featured “Jungle Youth”, “Silvertongue” and “My Body”. I do have to say — the wait to see Young the Giant was truly worth it. I cherished the moment even more than I would’ve had I seen them before. They are a band of truly talented guys who know how to move their hips and have fun on stage; and the most important part of their performance overall, was the fact that the fun the band was having onstage translated into the crowd. Fans were dancing with each other, one beer raised to the sky with smiles on their faces. It was a great way to forget that summer is almost over.