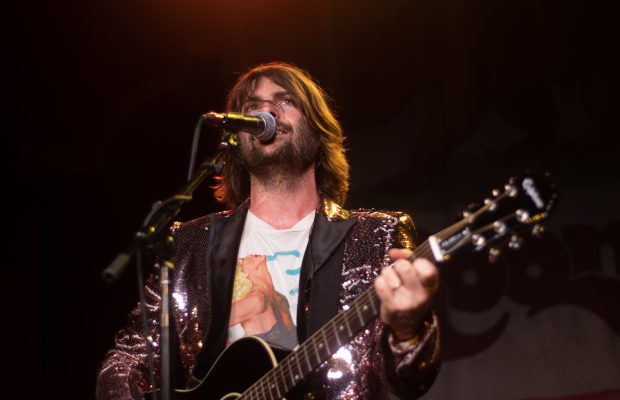 In a dazzling sparkling jacket, Robert Schwartzman takes the stage of the Bronze Peacock Room in Houston, Texas. The crowd has been antsy waiting for the show to start, but all of that energy leaves the room once Schwartzman picks up his guitar. For the next hour and a half, we’re taking on a journey with Schwartzman as he plays us music and reminisces on twenty years of Rooney. It’s hard to imagine that at sixteen years old Schwartzman and a group of friends in high school were crafting the music this music with such heart and soul. He jumps right into it with ”Stay Away” off the first album released way back in ’03. Through the show, Schwartzman gives the audience insight into the band’s history and inspiration for the music. The Break The Wall tour is nothing like I’ve every experience, half unplugged acoustic show half TedTalk.

Schwartzman is genuine and captivating throughout the show. He really connects with the crowd noticing every little detail, like a child in the audience who he advises covering his ears as he says a swear word during “I Should’ve Been After You”. We also take a moment to sing happy birthday to a girl in the crowd. Really wanting the audience to understand the inspiration behind he music Schwartzman slows the words in songs then takes a moment to really look into the lyrics. For instance during why he takes a moment really emphasize the lyrics in “Why”, “I want to cry all night with you, but my heart is running dry”, as he really wants us to understand what he’s trying to convey. It’s like we’re having our own personal Genius lyric video. A moment that brought tears to my eyes was when he explained writing “That Girl Has Love”, a song about a friend that took her life. It was beautiful.

The show closed out the show with “When Did Your Heart Go Missing?” The bands biggest commercial hit. He built up to the song while talking about how he was having a hard time writing on Calling the World the bands sophomore album. While being rejected song after song Schwartzman had to push himself to write the best song possible, then comes in “When Did Your Heart Go Missing” and boom they have a hit and they’re the second album is saved.

The night was so personal and exciting. I’ve never attended a show like this. This was truly a beautiful walk down memory lane with Schwartzman and twenty years of his band. From sixteen to thirty-six there is so much to this music and so much to come.