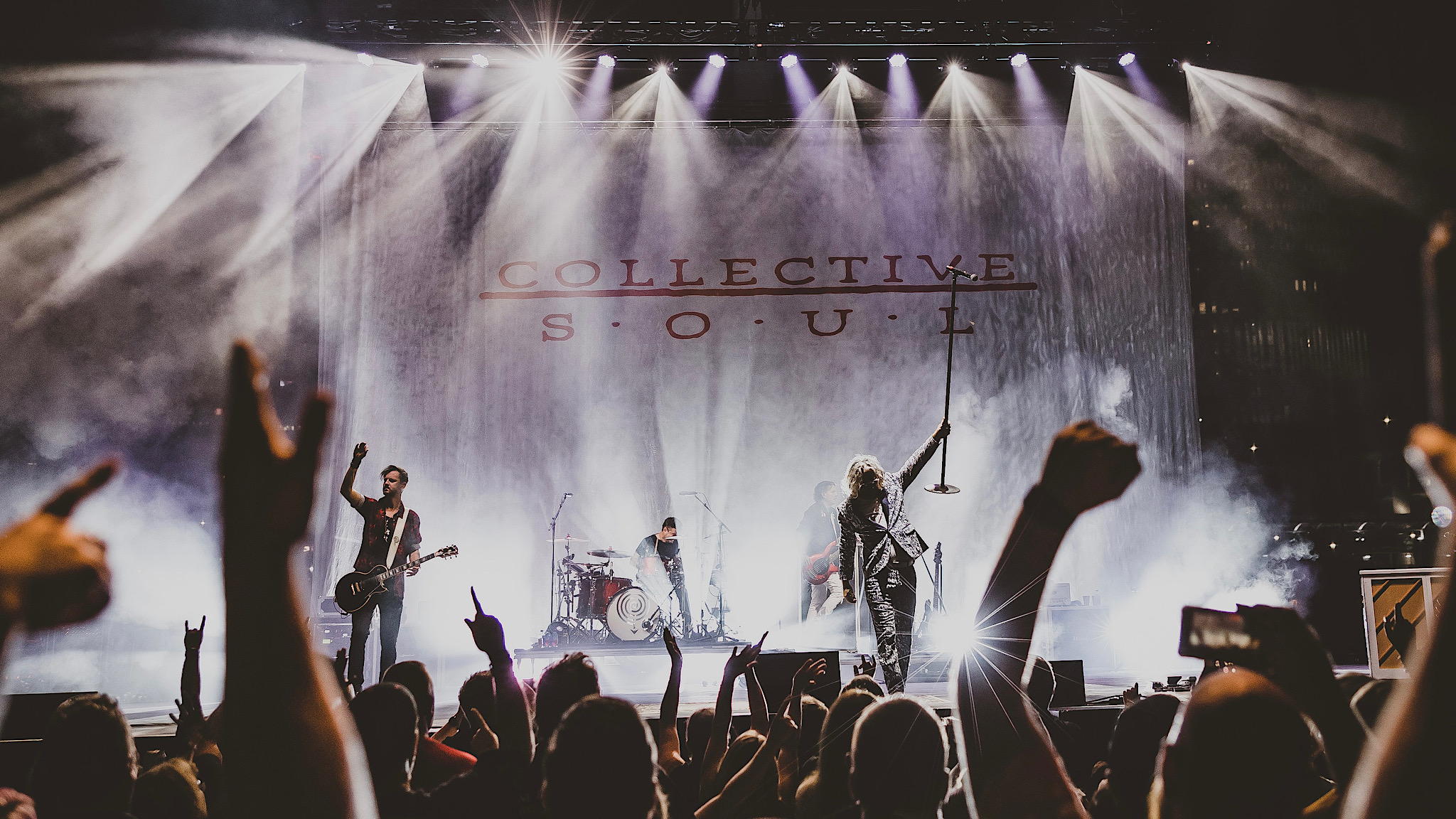 A healthy crowd filled Jacobs Pavilion at Nautica in Cleveland for a night of music.  Collective Soul and Switchfoot co-headlined with Jade Jackson supporting.  Even though the temperature outside, in the heart of Cleveland’s Flats, was what locals would refer to as “soupy” with high humidity and temperature, music fans of all ages were treated to a night of music spanning over three decades.

Jade Jackson opened the show, strapped with a Fender electric guitar and a beautiful yet hauntingly subdued voice.  Her twenty-five-minute set consisted of several originals including an unreleased new song, “You“, recorded material, and a cover.  The singer-songwriter, recently dropped from her major label on the first day of recording new material, told the crowd that her performance on the tour would be a way to “prove them [label] wrong”  and that this tour would be a way to pay for putting out new music.  A highlight of the set was the stripped-down, moody cover of Bruce Springsteen’s 1984’s hit, “Dancing in the Dark“, which would make the boss not only proud but equally mesmerized by the rendition.

With a quick seven-minute stage change, Switchfoot commanded the stage for their 75-minute set.  The southern California ensemble started off their set with “If the House Burns Down Tonight” from the “Where the Light Shines Through” Album.  The band covered the 1994’s Beastie Boys’ classic, “Sabotage“.  Lead singer Jon Foreman indicated that the song and album was the only thing playing in his Walkman in 1995.  The crowd was treated mid-cover when Foreman took the song on the move, gracing the crowd including those in the bleachers to a front row performance, high-fiving and hugging fans as he made his way around the venue.  “It’s so great to be with people again,” he said, as he made his way back on the stage to finish the set. The set also consisted of “Hello Hurricane“, performed acoustically, with the drums traded with a single snare and Jerome Fontamillas picking up an accordion. The band also included a crowd request, “Where I Belong.”

The set concluded with the two biggest hits, “Meant to Live” and “Dare You to Move.”

Collective Soul closed out the night with their 75-minute set that spanned about three decades.  In addition to their well-known hits including “Heavy” and “Shine“, the band played new material from their August 12, up-and-coming release, “Vibrating“.  While debuting “ All Our Pieces,” lead singer Ed Roland, joked with the crowd “it’s ok if we mess up, you haven’t heard this before.”

While engaging the crowd between songs, Ed told a story of a meet and greet earlier that day, in which a fan told Ed he would play the live DVD and would “rock his grandbaby every night to that DVD” and consequently, Ed dedicated “December” to “baby Emma.”  The band brought out Tristin Turpin, son of bassist Will Turpin, to play piano on this song, one of the band’s most iconic hits.   Tristin did a solid job on the keys, as if to hint that the next generation is ready to buy into the Collective Soul musical stock.  Tristin remained on stage for the next song, a cover of R.E.M’s “The One I Love.”  Joining on stage for this cover were Jon Foreman (Switchfoot) and Jade Jackson.  The cover started as a duet between Foreman and Roland with Jackson filling in the bridge, but expanded to include Tristin Turpin singing the iconic lyrics, impressing all in the crowd and on stage.  The band concluded their set about ten minutes past the city’s curfew of 11 pm with “Run“.

For more information including the latest tour dates and releases, check out each artists’ website and social media accounts.