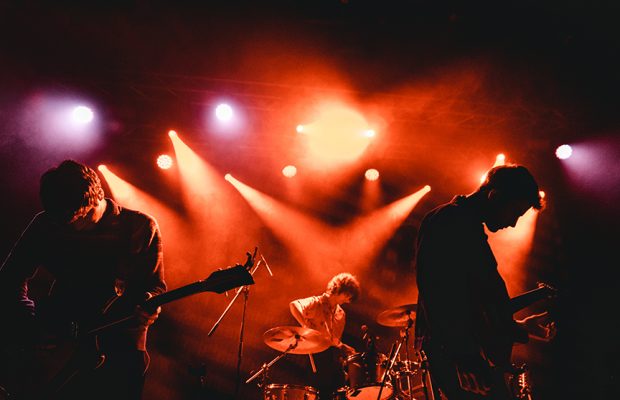 Friday night saw Manchester Academy sold out to the brim as Indie Rock trio Wallows came to town on their first ever world tour and for the first ever time for Manchester and it certainly won’t be their last one! The boyband consisting of Dylan Minnette (guitar/vocals), Braeden Lemasters (guitar/vocals) and Cole Preston (drums) are long-time childhood friends and still hot from the release of their debut album Nothing Happens; the success and climb to the top of the indie charts has already begun for the boys. Now, like many of those in the Mancunian crowd and around the world, I was first introduced to Dylan Minnette after his appearance in the hit Netlfix series “13 Reasons Why”. His captivating portrayal of the character Clay Jensen captured the hearts of many viewers and since the shows success, he has only had even more success in the Wallows band.

The trio took to the stage one by one with Dylan leading to the deafening screams of those in attendance, second to the stage was drummer Cole Preston and guitarist Braeden Lemasters as the unique indie rock styling band kicked off the night with “Do Not Wait” & “Only Friend”. The energy throughout the crowd and on stage was nothing like I had seen before with the place practically rocking to the boy’s versatile musical talents, fan favourites such as “Scrawny” and my personal favourite song “Are You Bored Yet?”, were played to the joyous crowd who repeated every single word back to the boys all the way through the night. Wallows music is a breath of fresh air in modern music these days and as someone whose musical taste is somewhat opposite to that of Wallows, I’d be lying if I said I wasn’t tapping my foot to the music whilst photographing the trio, and even as I’m writing these words now! I definitely see a bright, bright future for the band so if you get the chance to see these boys now make sure you snatch up the offer!