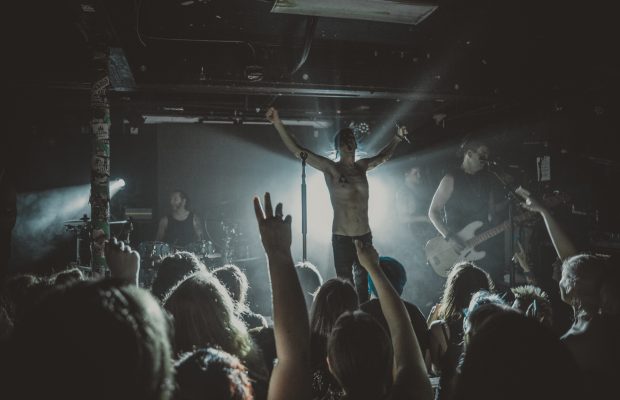 Photos and Review by Mike Thomas

Saturday, June First was a very unique experience, On any given day, in any major Canadian city, Mariana’s Trench could easily play to a crowd of 5000 people. While completing the 2nd leg of the Suspend Gravity tour, our favourite Canadians found them playing to smaller audiences roughly 1500-2000 people. Now! What made Seattle special, wasn’t that the band had a poor draw, Seattle being less than three hours from The home town of all members, It was an ironic booking error that lead Mariana’s Trench to playing “A sweaty bar show” as lead singer Josh Ramsay titled it. While every other appropriately sized venue was taken, Mariana’s Trench was faced with the decision or either not playing Seattle, or playing to 800 in Seattle’s El Corazon.

Naturally, the Canadians elected to perform a very intimate show. While this was my 7th time attending a Mariana’s Trench performance, it was by far my favourite! A group known for large stage production, and exuberant lighting. Those aspects were toned down to a smaller scale. with no large entrance to be made, MT snuck out from behind the corner of a stage, and kicked off the evening with their intro trackÂ Eleonora.Â Following a balanced set list of new, and old. Mariana’s Trench played all of their hits, and some newer deep tracks.

being a fan of this band since the mid 2000’s Its always exciting to see longevity, and hard work pay off. at one point during the performance, Josh expressed his gratitude to the crowd, he told everyone How Mariana’s Trench is an unsigned band in the United States, he went on to state thatÂ Phantoms, the four piece’s latest album, reached #1 on its respective chart.

As the night came to a close, the band concluded with a final epilogue inÂ The Killing Kind. Through each record given to us by Mariana’s Trench, they always have a grand concluding track to sum up the record, this usually translates to the encore of the night, and they certainly didn’t leave Seattle disappointed.

Leg 3 Of the Suspend Gravity tour kicks off this fall: