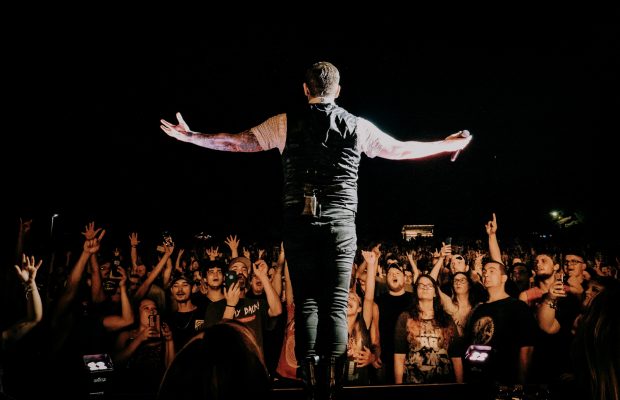 Wednesday evening Shinedown brought their highly anticipated ATTENTION ATTENTION Tour to the Keybank Pavilion in Pittsburgh. Along for the ride were Broken Hands, Dinosaur Pile-Up and Los Angeles based rockers, Badflower.

Dinosaur Pile-Up, an English alternative rock band from Leeds did an amazing job warming up the crowd with songs from their latest release Celebrity Mansions.

Next up were Badflower and I was looking forward to seeing their set. The band recently released their first album OK, I’m Sick and their performance did not disappoint. Josh, their lead singer, went crowd surfing and after their set ended, I overheard many people in the audience saying how impressed they were.

When it was finally time for Shinedown to hit the stage, the crowd was more than ready to see their favorite band. Their latest album ATTENTION ATTENTION was released back in 2018 and they started the show off with Devil off said album.

After the first three songs, lead singer Brent Smith shook hands with every photographer in the photo pit and thanked them for coming.  This was very much appreciated.

For the next 80 minutes, they played a great variety of songs spanning most of their albums. About halfway through the set, all bandmembers went onto separate little stages in the audience to play a small 4 song set. What a great way to bring the show closer to the people sitting further back.

After a very solid 90 minute set, the show ended with Brilliant off their latest release and left everyone wanting more.

Shinedown are still touring in the US until October, before heading overseas. Make sure to catch them when they play in your area.