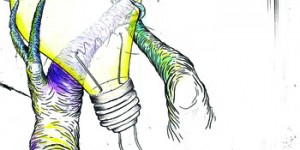 From the desert area and vibrant city of Las Vegas, Nevada is Stolas, a experimental post-hardcore band who is sure to get huge soon. They released their self-produced and first EP earlier this month on February 15th, and it truly shows that this band will be impressive from the beginning.

Losing Wings starts off with a big bang through the song “Time & The Sun”. The song really sets the mood for the EP, bringing an experimental sound. The song sounds somewhat similar to musical acts like The Mars Volta and even Pierce The Veil, but still keeps a unique sound to it. Songs such as “Panic” which is a slower song on the EP is definitely notable, along with “Our Last Night On Earth”. Not to mention the intro to “Year Of The Light” is very impressive, the rhythm and drums sped up to a speed that doesn’t ruin the intro as opposed to rather generic metal bands. Losing Wings definitely has that dark undertone to the EP that lingers there while the melody is sent in a different direction.

Overall, Losing Wings is an EP that is necessary to check out. For a self-produced album, Stolas did a more than a phenomenal  job. They are sure to be the next upcoming band, so be sure to keep an eye out for them in the near future!