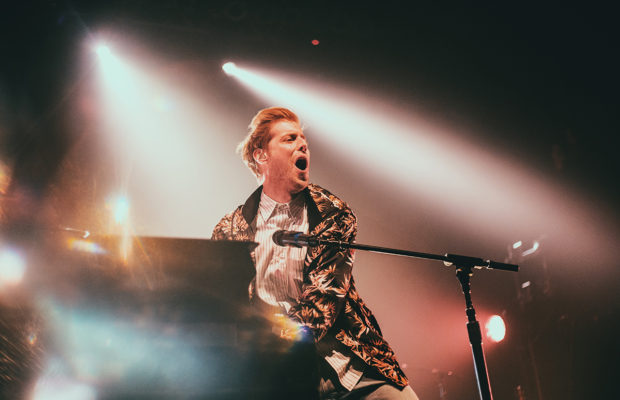 Andrew McMahon in the Wilderness

As baseball fans began to file out of Fenway Park on Saturday afternoon, just across the street the line for Andrew McMahon in The Wilderness’ sold out show was beginning to form. McMahon is no stranger to putting on spectacular shows. He’s performed and composed music with acts such as Something Corporate, Jack’s Mannequin, and most recently Andrew McMahon in The Wilderness. His latest record, Zombies on Broadway, is taking him all across the United States this spring, joined by Atlas Genius and Night Riots.

With the sun setting on Boston and the house lights dimming, Night Riots took to the stage. The California-based band, composed of childhood friends, began to captivate the eager crowd with their unique lyrics and moody melodies. Although not every member of the audience seemed to recognize Night Riots, by the end of the set every last one of them was singing along to catchy tunes like “Breaking Free” and “Contagious”.

Next to grace the stage was Atlas Genius. Despite this being their second show of the night, the Australian indie rock band began their set with energy and excitement. Immediately, the group launched into “Stockholm”, a track from their most recent album. This served as a perfect introduction to audience members new to the indie rockers, as well as a welcomed sound to longtime fans.

By the time Andrew McMahon ran onto the stage, the House of Blues was filled to the brim. Had one more person been present it would have been considered a fire hazard. Fittingly, he began his set with the Zombies on Broadway track, “Fire Escape”. Although the crowd had already been dancing and jumping around to Night Riots and Atlas Genius, there was still a surplus of energy left over for McMahon. He had a large smile across his face as he progressed through much of his triumphant discography, ending the show with “Cecilia and the Satellite”.