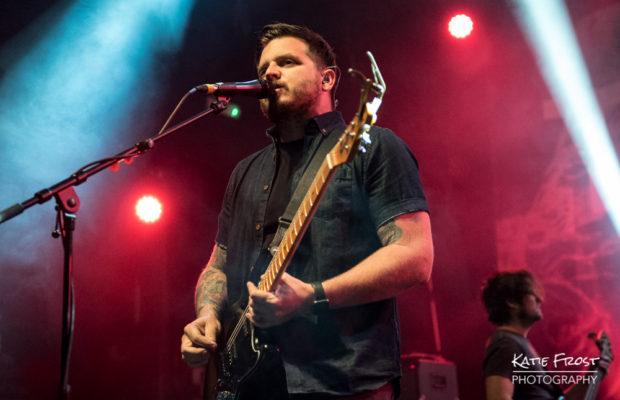 American post-hardcore band Thrice travelled across the pond to play two shows in the UK; one at Rock City in Nottingham, and one at KOKO in London. I went along with my camera to the  London show to capture the action.

As one of only two shows in the UK, it was no surprise that the show was sold out, and as I arrived at the venue there was already a huge queue snaking around the side of the building, with fans eager to get inside. KOKO is one of the my favourite venues in London, with its beautiful red interior, seemingly-endless balconies and giant mirror ball, and when it is filled with music fans it really comes alive!

First to take to the Camden stage were God Damn from Wolverhampton. Right from the start the band were full of energy, bounding around the stage…and off it, with vocalist Thom heading out into the crowd to get everyone involved in their performance. The band put on a fantastic and intense set, playing tracks from their third studio album ‘Everything Ever’ which was released at the end of last year. Their heavy, no-nonsense riffs, gritty harsh melodies and gravely vocals impressed the crowd and everyone seemed to thoroughly enjoy their set.

At the clock struck 9pm, the headliners took to the stage, and were greeted by a huge roar from the thrilled crowd. As Thrice began their set with ‘Hurricane’ the packed room heaved with excitement, and the energy in the room was contagious. The Californian four-piece treated us to a mixture of tracks from their extensive back-catalogue, including crowd-favourite ‘The Artist In The Ambulance’ which had everyone singing along. The Californian four-piece took a break for a couple of years but were back with a bang with the release of their eighth studio album ‘To Be Everywhere Is To Be Nowhere’ back in May 2016. Thrice ended their mammoth nineteen-song set with ‘The Long Defeat’ and the thousand-strong crowd sang along at the top of their lungs. These guys are definitely worth seeing if they come to your town, and the same goes for God Damn – what a brilliant evening of live music!