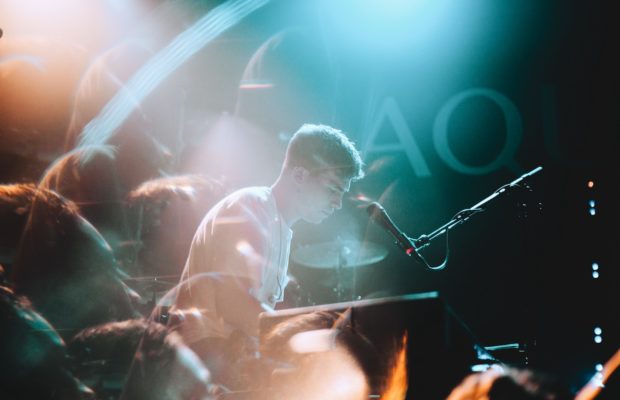 It has been an exciting year for Brooklyn-based musician Adrian Galvin, or as you may know him: Yoke Lore. After touring with Overcoats earlier this year, and releasing his “Goodpain” EP, he’s now touring as support for british duo Aquilo. Although he was only opening the concert, he made the stage his own for what could be considered a hometown show. Yoke Lore’s eclectic sound filled out one of the largest venues he’s played to date, making the audience feel like they were witnessing something truly special. As he burst into the title track of the EP, he offered the audience some words of wisdom: one needs to get through the necessary bad to reach the good in life.

As Tom Higham and Ben Fletcher took the stage at approximately 10pm, the audience erupted in applause. If Aquilo’s music sounds ethereal and jaw dropping on record, there are no words to describe their live performance. Although the duo released a full length album earlier this year, they treated the audience to some new songs that will be on part one of a two part album out next month.

There is still time to catch Aquilo and Yoke Lore on tour if you’re lucky. Checkout the remaining dates here:

Photo and Words by Adele Sakey