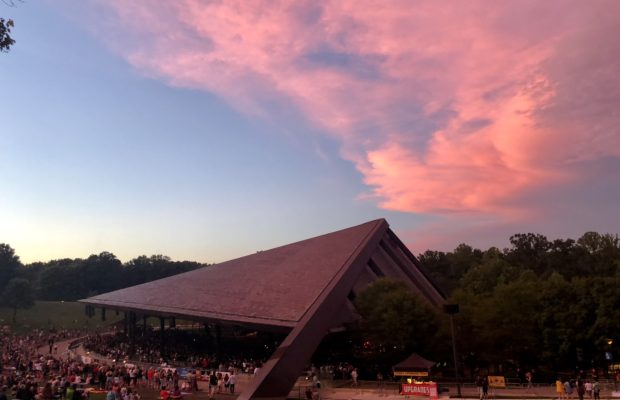 Niall Horan (former One Direction member) brought his Flicker Wold Tour to Blossom Music Center in Cuyahoga Falls, OH. Country star Maren Morris, who opened the show joined him on this tour all across the country.

After a short delay due to torrential downpour the gates finally opened and the pavilion, as well as the lawn, filled up quickly.

Maren Morris hit the stage just on time and the crowd, mainly young teenagers and their parents, sang along to every song. She included a beautiful rendition of Beyone’s “Halo” and closed the set with her smash hit “The Middle”.

When Niall Horan took the stage, the crowd screamed so loud that it was impossible to hear the music at first, but they quickly settled and cheered and sang along. He opened the set with “On The Loose” and played his debut album “Flicker” in its entirety. In between there were a few One Direction songs and an awesome cover of Springsteen’s “Dancing In The Dark”.

For “Seeing Blind” Maren Morris joined him again on stage and you could tell how much fun both of them had performing it together.

Niall shared that on this day exactly a year ago he played his first solo show and how no one in the audience knew the lyrics to any of his songs yet. That certainly changed as the crowd sang along to every word that came out of his mouth tonight.

During “Fire Away” the crowd held little paper hearts in front of their cell phone flashlights that helped create the colors of the Irish flag throughout the pavilion. It looked spectacular.

06. Dancing In The Dark (Springsteen cover)

16. Drag Me Down (One Direction song)