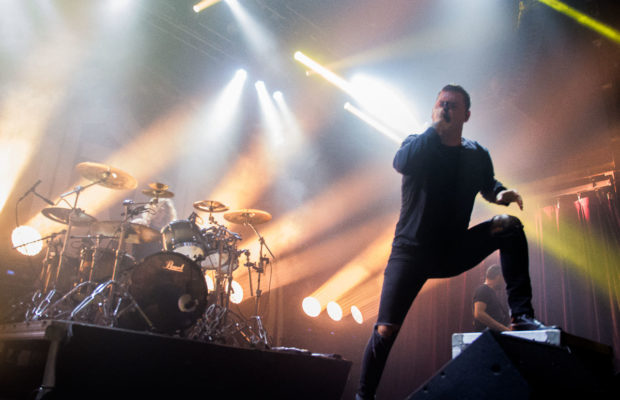 Parkway Drive with Stick To Your Guns and Bad Omens

Currently touring in support of their latest album Reverence, Australian metalcore band Parkway Drive made a stop in Louisville, KY.  Performing to a sold out crowd of diehard fans, the venue was vibrating with an incredible energy.  From the moment they took the stage, singer Winston McCall, guitarists Luke Kilpatrick and Jeff Ling, bassist Jia O’Connor and drummer Ben Gordon performed an energetic set.  McCall smiled often throughout the set, thanking the crowd for being there and supporting the band.  For most of the set the crowd was wild, with a steady stream of crowd surfers making their way up to the barricade, keeping security busy all night in helping them down!  From the beginning of their set, there was a young boy, maybe 10 years old, at the barricade singing his heart out with his fists in the air.  A few songs into their set, McCall pulled the kid up onto the stage, much to his delight, and gave the kid a hug.  He then helped the kid jump from the stage into the crowd, crowd surfing towards the back of the venue and then being safely led back to his spot at the barricade.  McCall gave the crowd plenty of attention this evening, shaking the hands of those at the barricade and leading the crowd in multiple sing alongs, as well as asking them to put their hands in the air!  Playing a nice mix of songs from their catalog, the band performed several older songs, such as “Carrion”, “Boneyards”, “Idols and Anchors” and “Karma”, in addition to newer ones such as “Absolute Power” and “Wishing Wells”.  At the end of the set, the band left the stage briefly before coming back out for a 2 song encore.  Starting out the encore with “Crushed”, McCall told the crowd that they were mental and thanked them for their energy.  He then asked if they could handle one more and told them to lose themselves a bit and dance this one out before launching into “Bottom Feeder”.  Parkway Drive is a fun and high energy band and gave their fans a great evening!  LA Metal band Bad Omens and California Hardcore band Stick To Your Guns opened the show.