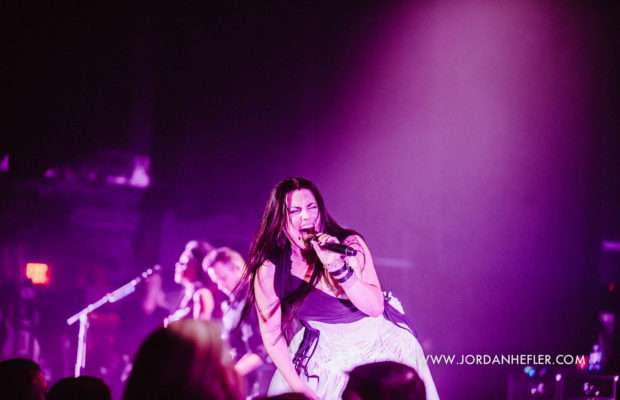 Everyone at this point knows who Evanescence is. The iconic multi-platinum band of the early 2000’s is most well known for their edgy rock sound and haunting vocals by front woman Amy Lee. The cool November night at the historic Saenger Theatre in New Orleans, LA was the perfect backdrop for the band’s triumphant return to the city. Opening act Viridia presented a heavy and energetic performance to the crowd, who eagerly awaited the first performance from Evanescence in the city in thirteen years.

Opening with one of their most popular songs from their first album, Fallen, “Everybody’s Fool” got the seated venue out of their velvet chairs and onto their feet right from the get go. Amy Lee’s powerful presence is in another league in comparison to most rock bands: Between her Victorian inspired fashion choices (which seemed perfectly reflected by the decadence of the Saenger Theatre) and her powerful vocal abilities, the band’s sound was an atmospheric force to be reckoned with.

Although the crowd seemed to gush with emotion and admiration, it was clear that the feelings were mutual amongst the band while on stage. At one point, Amy Lee even stopped singing her iconic ballad “My Immortal” and started to tear up. Having been away from the touring lifestyle for quite some time, it seemed evident that the band was elated to be back in the spotlight, and in particular, performing to such an attentive crowd.

As expected, the theatre went wild for the hit song, “Bring Me To Life.” Without Paul McCoy present, the crowd filled in with the consequential yelling of “WAKE ME UP” each time Amy Lee belted “Wake me up inside.” Everyone’s cell phones were in the air, despite the constant requests from security to stop filming the show. The energy was tangible in the air, solidifying the fact that there is no other band that can put on a show as epic and dramatic as that of Evanescence.

Photos and Review by Jordan Hefler