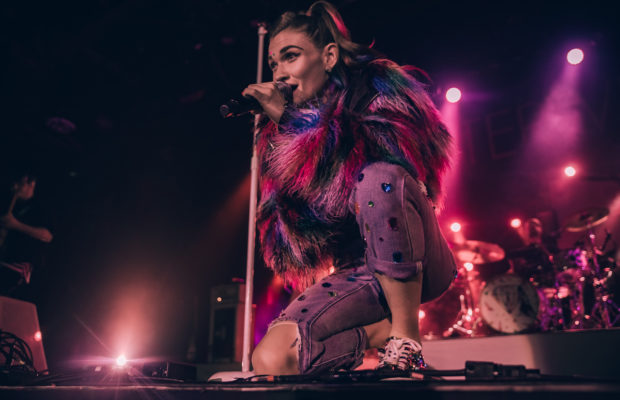 Misterwives with Vinyl Theatre and Smallpools

It seems like wherever you look during the fall months, there’s a show. Very rarely is there a night in Philadelphia that you can’t find a show somewhere. This past weekend was no exception, with a great lineup of shows for saturday night across a multitude of venues, none other than Misterwives headlined Philadelphia’s newest music venue – The Fillmore, in the Fishtown neighborhood of Philadelphia. With openers Vinyl Theatre and Smallpools, the night was full of electric and eclectic music.

Vinyl Theatre started the night off with quite the array of electric indie pop bops. Known for their 2014 single “Breaking Up My Bones,” which has reached nearly 10 million Spotify streams, their high energy stage presence and music radiated positive vibes throughout the crowd. Combining sounds similar to those of twenty one pilots and Hippo Campus, the Milwaukee four-piece utilizes wicked guitar riffs alongside catchy lyrics. Beyond playing their originals, the group also played a cover of Eminem’s “Lose Yourself,” which had the crowd singing along.

Following Vinyl Theatre was Los Angeles group Smallpools. This group is the textbook definition of indie rockers – infectious riffs, bright vocals, and radiant rhythms. Vocalist Sean Scanlon treated the crowd to a cover of “Creep” by none other than Radiohead. Buried amongst originals including “Passenger Side” and “Million Bucks,” the crowd sang along with Scanlon throughout the set. As The Fillmore started to fill up, the crowd’s energy became higher and higher, and by the end of Smallpools’ set, the crowd was dancing and having the time of their lives

Misterwives. Fronted by badass and femme icon Mandy Lee, the bands’ 80s psychedelic rock sound has earned them quite the name in the biz. Their sophomore LP “Connect the Dots,” released back in May 2017, peaked at 19 and 26 on the U.S. alternative and rock charts, respectively. Their bright and cheery song, monumented by vibrant instrumentals and fiery vocals from Lee, emanated energetic vibes throughout the packed walls of the venue.