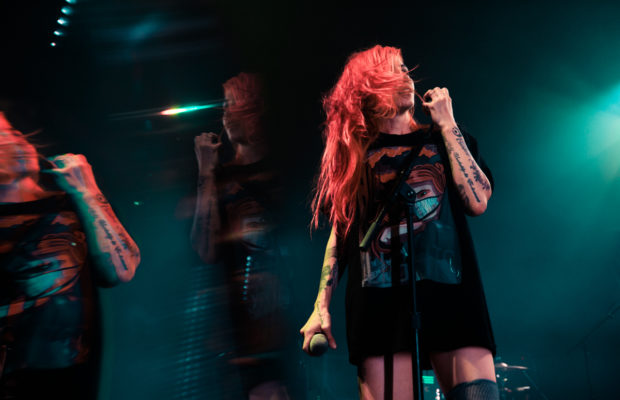 Words and photos by Nina Tadic

On PVRIS’s most recent tour, the band decided to make a powerful statement by including all acts that include a woman in their lineup. Opener Flint Eastwood has a frontwoman, LIGHTS is a female vocal powerhouse, and Lynn Gunn herself fronts PVRIS. In making this decision, PVRIS was not sloppy – they picked women who know how to perform, LIGHTs especially.
With the crowd already warmed up from Flint Eastwood’s performance, the second LIGHTS took the stage, the crowd lit up (pun intended)! Walking out into a stage bathed in purple and blue lights, she immediately began the intro to her new album, Skin and Earth, and then let her way into a bubbly, upbeat hit, “Skydiving.”
For the entirety of her set, LIGHTS strutted her stuff, playing her keys and hitting some of the highest, sharpest, strongest notes a crowd has ever witnessed. Vocally, her performance was exactly spot-on with the way her recordings sound, something very rare. On top of that, she had no problem interacting with the crowd, interacting and talking about the way life works, and mentioning the fact that she will be back to Chicago on her upcoming tour, promoting her new album.
Later on, towards the end of her set, she mentioned the fact that their van broke down just prior to the Chicago performance, and said that when life knocks you down, the only place to go is up. She used this anecdote to lead into a wonderful finale, her hit track “Up We Go.”