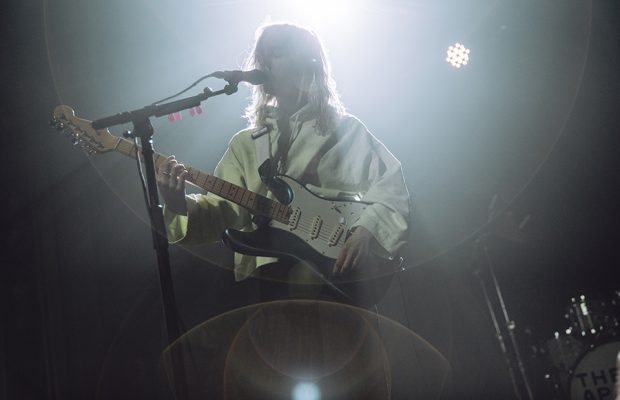 Tuesday night marked my first return to Webster Hall since the iconic New York City venue closed its doors for renovations roughly two years ago. Inside, the venue was nearly unrecognizable. The newly industrialized space was chique and modern and was packed to the brim with fans waiting for The Japanese House and Art School Girlfriend to commence their performance.

Art School Girlfriend kicked off the night and performed solo, being bathed in the red and blue hued lights. Her very first New York City performance was off to a great start! Instantly the chatter among the crowd subsided as the backing track began and Art School Girlfriend slowly strummed chords on her guitar. Her soothing voice radiated throughout the venue for the duration of her 25 minute set before she concluded and thanked the crowd for their time. Her humbleness and stage presence were refreshing and truly got the crowd prepared and excited for what was to come.

By the time the clock struck 9pm and the ABBA sing along throughout the crowd had finished, the lights dimmed and loud shrieks and screams erupted throughout Webster Hall. The Japanese House, the solo act of Amber Bain, graced the stage and the night commenced with her hit “Face Like Thunder.” Bain, though small in stature, was mighty in stage performance as her smile spread from ear to ear as she hipped around the stage.

It had been years since I had the pleasure of seeing The Japanese House perform live. The last time, also my first time, was when Bain opened for The 1975 at Barclays Center. A timid teenage girl with a single killer EP was singing alone on the arena stage. Three years later, almost to the date, a beautiful and confident young woman with a killer, critically acclaimed debut full length LP was headlining one of New York City’s most iconic venues.

Bain’s setlist was wrought with emotions as she played songs both new and old including “Cool Blue”, “Everybody Hates Me” and “We Talk All The Time.” The Japanese House put on a strong performance that showcased her extreme talents and proved to everyone in attendance (and then some), why Amber Bain is one of the top names to be on the lookout for in the future. Hopefully next time we see The Japanese House in New York, it’s because she’s selling out the Barclays Center rather than opening the night!