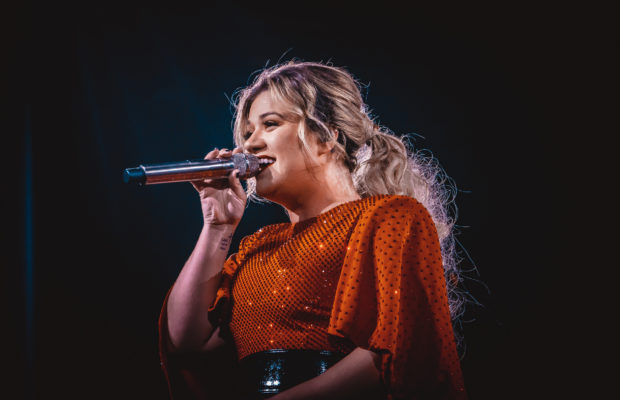 Kelly Clarkson brought her highly anticipated Meaning Of Life tour to Cleveland last week. Surprisingly the show did not sell as well as the promoter had hoped and the upper-level seats were closed off with black drapes. Most of her other shows throughout the US have been selling very well.

Those that decided to come to the event were treated to an incredible show. Brynn Cartelli and Kelsea Ballerini opened the evening and both artists had fans in the audience singing along to their songs.

Clarkson’s stage had a catwalk that went into the audience and surrounding that catwalk were VIP seats and a fully stocked bar. What an amazing idea.

When the lights went off, the crowd could barely contain themselves, cheering and screaming as Kelly was lifted up on stage at the end of the catwalk while performing an a capella version of her very first single “A Moment Like This” which won her the title  American Idol back in 2002.

Her set included many of her hit singles and fans ranging in age from 4-99 years old were singing along to every word. At one point during the show, she live-streamed the U2 cover “One” on her social media as “minute and a glass of wine”, while sipping on a glass of red wine and joking with the audience. Her jokes throughout the show were absolutely funny, not rehearsed and made it feel like she is your best friend and you are just there hanging out with her.

During the last song before the encore, Miss Independent, Clarkson was joined on stage by Brynn Cartelli & Kelsea Ballerini and you could tell these three women are having the time of their lives on this tour.

After another four songs, she closed her set with her hit single “Since U Been Gone” and everyone in the audience wished they could turn back time and experience this unbelievable concert again. I know I did.

Setlist:
A Moment Like This (acapella; shortened)
Meaning of Life
Walk Away
Love So Soft
Whole Lotta Woman
Behind These Hazel Eyes
Breakaway
Piece by Piece
Because of You / Just Missed the Train / Beautiful Disaster / Sober / Good Goes the Bye / Would You Call That Love
One (U2 cover)
Run Run Run
My Life Would Suck Without You
Heat
Heartbeat Song
Miss Independent (with Brynn Cartellini and Kelsea Ballerini)