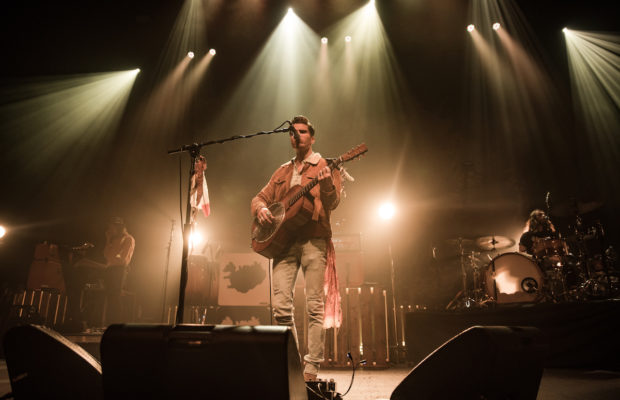 After earning the top spot on the US alternative charts with their hit single “Way Down We Go,” Icelandic rooted rock band Kaleo has made quite the name for themselves around the globe. Known for their garage punk rock sound, the group brought their 2017 headlining tour, Kaleo Express, through the Tower Theatre in Upper Darby, PA, Oct. 18, 2017. Supported by acts Wilder and PA native ZZ Ward, the night was full of good old fashioned rock and roll with a modern twist.

The night started with Wilder, a Nashville rock group, whose single “Same Way” surpassed 150,000 plays on spotify. The group’s gritty folk rock sound had the crowd jamming out right off the bat. Next up was ZZ Ward, a singer-songwriter hailing from the greater Philadelphia area. Her americana-folk sound, reminiscent of others like Elle King and Grace Potter, struck a chord (literally) with Kaleo fans, who started singing along to her songs like they had been lifelong fans.

As Kaleo took the stage, the nearly sold-out crowd roared. They started the night with “Broken Bones” off of their most recent studio album “A/B.” Following with “I Can’t Go On Without You,” the group showcased their emotional, soulful lyrics to the crowd. With soul and country infused americana rock is one that is hard to achieve successfully, and also one that Kaleo has mastered. Hailing from Mosfellsbær, a few miles outside of Reykjavik, Iceland, they threw in their song “Vor í Vaglaskógi,” which is written in Icelandic and translates to “Spring in Vaglaskogur.” Kaleo wrapped up their set with their gold-award winning single “Way Down We Go.”