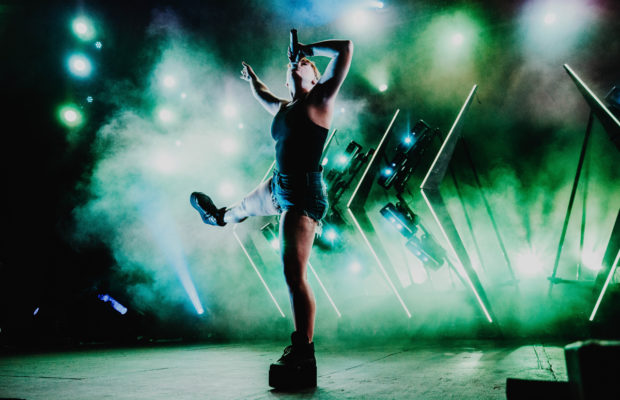 During what is supposed to be the hottest month of the year, New York City was seeing a dip in the excruciating heat wave — just in time for Sylvan Esso’s headlining show in Prospect Park. The weather was a crisp 70 something degrees as I pulled up to Prospect Park’s West Entrance by the Prospect Park Bandshell. Sylvan Esso was headlining BRIC Celebrate Brooklyn Festival — a summer-long festival where mostly free (some ticketed) events are held in order to, you guessed it, celebrate Brooklyn. The lovely festival was celebrating its 39th consecutive year in Prospect Park and it was very clear that Sylvan Esso was excited to be back, gracing the stage for another enthused performance.

I always find it particularly special when I go to a concert and I’m not aware of the opening band, but I end up falling in love with them. That’s exactly what happened on Wednesday night as I stood there — perched against the barricade, watching Australian indie-rockers, Middle Kids, smash their entire set. They are an extremely talented band who clearly have their stuff together. They make powerful songs with great beats and they have the stage presence to match. The bandshell has a rather large stage that can be intimidating for some, but these guys really made it their own as they filled their lengthy set with songs from their debut self-titled EP. As I looked out into the crowd around me, it was clear to see that Middle Kids had some fans of their own as people danced around, singing along to the lyrics with their locally sourced beer in their hands. It was all fun and festivities — which only grew as it got closer to Sylvan Esso time.

The sun had set and the stage lights dimmed. Round string lights that floated across the crowd from the stage to the fence at the back of the venue were all that we could see before a heavy base captivated the audience. One half of Sylvan Esso — Nick Sanborn — graced the stage, taking his position behind the keyboard. The crowd roared as the intro to “The Glow” began and Amelia entered the stage. In her infamous platform sneakers, Amelia wasted no time, leaning down to come face to face with the crowd as she sang the lyrics.

Sylvan Esso was celebrating the release of their Mountain Sessions EP, which featured acoustic renditions of songs from their sophomore record What Now. The crowd was amped up throughout the night as the band played songs both new and old including “Kick, Jump, Twist”, “H.S.K.T”, “Coffee”, “Radio” and more! Despite being from North Carolina, Sylvan Esso made Prospect Park their home that night and they celebrated the heck out of that place as they blew the metaphorical roof off that place.