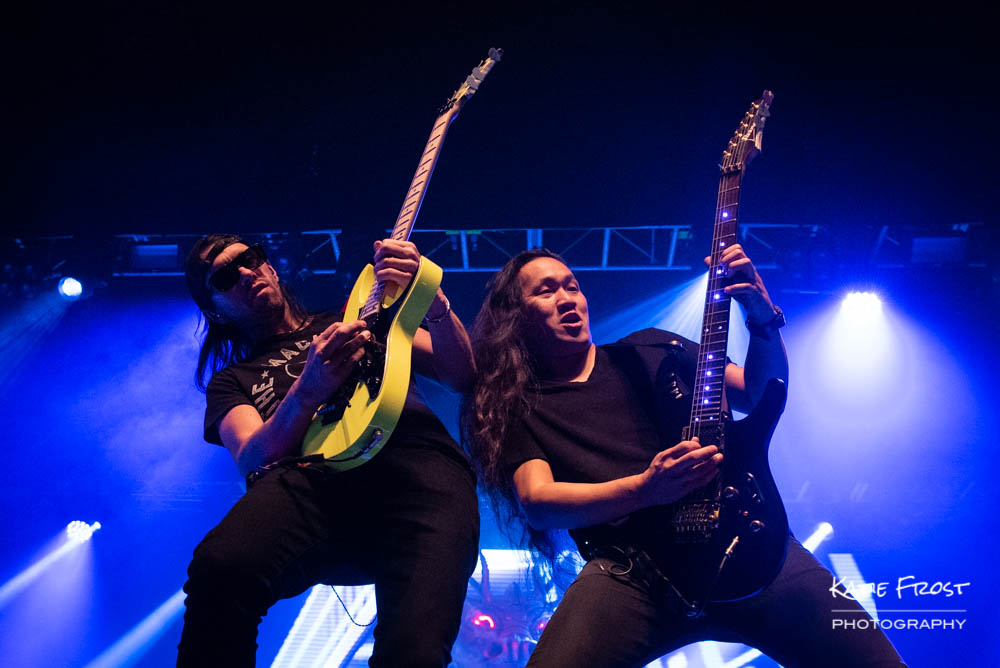 Dragonforce with Lovebites and McRockln & Hutch

British power metal band Dragonforce are currently part-way through an 11-date UK tour in support of their eighth studio album Extreme Power Metal, which was released in September 2019. I headed to London’s Kentish Town Forum in the band’s home-town (and mine), excited to hear some of the new tracks as well as classics from the band’s back-catalogue.

First to take to the stage just 30 minutes after doors opened were guitar and synth two-piece McRocklin & Hutch, who describe their sound as “new retro rockwave shred”. The duo played tracks from their debut album Riding Out, which was released earlier this year, with McRocklin was on guitar and Hutch on synth. Their 80s-inspired set seemed to go down well with the steadily-increasing number of bodies in the room.

Up next were all-female heavy metal five-piece Lovebites from Japan, who won “Best New Band” at the 2018 Metalhammer Golden Gods awards. They opened their set with “The Hammer of Wrath” from their 2017 album Awakening From Abyss and the crowd were really loving their set right from the very start – frequently chanting the band’s name. If I am honest I though they might have been a bit of a gimmick band, but fair play to them they were all playing their instruments and absolutely killing it! The definitely blew me away with their own unique take on heavy metal. As well as tracks from Awakening From Abyss, Lovebites treated the crowd to tracks from their 2018 album Clockwork Immortality and their 2018 EP Battle Against Damnation, plus new track “Signs Of Deliverance”.

Dragonforce’s stage set was heavily influenced by the band’s love of video games, and featured two games machines either side of the stage and an imposing dragon behind the drum riser. At around 9pm the lights went down and the room was lit from behind by lasers before the band took to the stage and launched straight into “Highway To Oblivion” from Extreme Power Metal, complete with confetti cannons. Second song “Fury Of The Storm” (from 2004’s Sonic Firestorm) is always my go-to track when I have loads to do and need to get it done fast, and it is always great to see it performed live. The CO2 seemed to not go off quite as planned and us photographers were hurriedly told to get to the side of the photopit, which sadly meant that we couldn’t properly photograph the song, but it was still great to watch it from the wings. Third song “The Last Dragonborn” was inspired by the band’s love of computer game Skyrim, which was brilliant and seemed to go down well with the crowd.

I don’t think the show was sold out, but the 2,300-capacity room certainly looked very full to me, and the band seemed to be thrilled to be playing such a big home-town show. Known for their high-speed dual guitar sounds, long and fast guitar solos, fantasy-themed lyrics and retro video game-influenced sound Dragonforce put on a great show, and it was great to watch. For the encore, Dragonforce returned to the stage with a glorious cover of Celine Dion’s “My Heart Will Go On”, before ending their set with platinum-selling “Through The Fire And Flames” from their 2006 album Inhuman Rampage, that you might recognise from Guitar Hero III.

Dragonforce will wrap up the UK-leg of their tour on 14 November in Newcastle, before bringing it to Europe in February 2020. Further details can be found on their website.