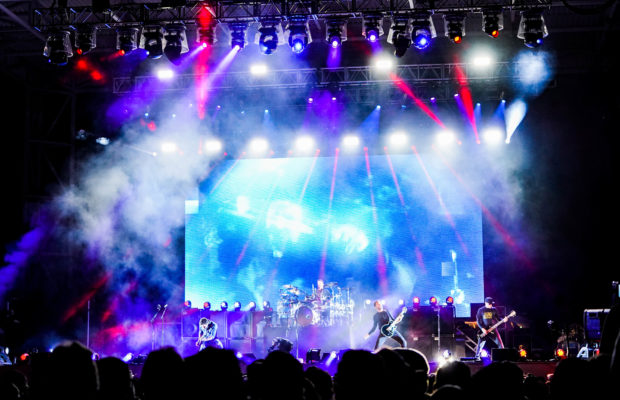 It was day 7 of the Annual event Cheyenne Frontier Days. 7 days full of food, events, music, rides, & more. You would think the energy would have started winding down after day 3; but not in this city. As the sun started setting and the damaging hail started to wind down, everyone still made the effort to get themselves into the night show and they were not disappointed.

After the mud had accumulated, the rain stopped, and temperature dropped, The Michigan natives- Pop Evil kicked off the show with energy that got everyone’s head moving. Leigh (Vocalist) eventually made his way into the crowd and was held up by his ankles. He stood over all of the fans and embraced every single person standing in front of him. The stage presence they provided along with their audience interaction will leave a lasting impression.

After an hour of anticipation, Nickelback Kicked off their set with “Million Miles an Hour” and set the mood right. The amazing lighting for the show was the cherry on top of the evening. Towards the end of their set, they took audience interaction up a notch and physically brought two fans up on stage. Can you guess what song they performed? You got it! Rockstar. Talk about giving the opportunity of a lifetime!

As the set came to a close, The Canadian rock band played a hit song that every person in that place knew every word to. The crowd screamed “How you remind me” in Unison with Chad Kroeger and it immediately brought me back to 2001.  After the lights dimmed down and the crowd cheered loudly, Nickelback walked back out and played 2 more songs for their encore. The night as a whole was extremely entertaining and it wound up being a perfect addition to the Frontier Nights schedule.