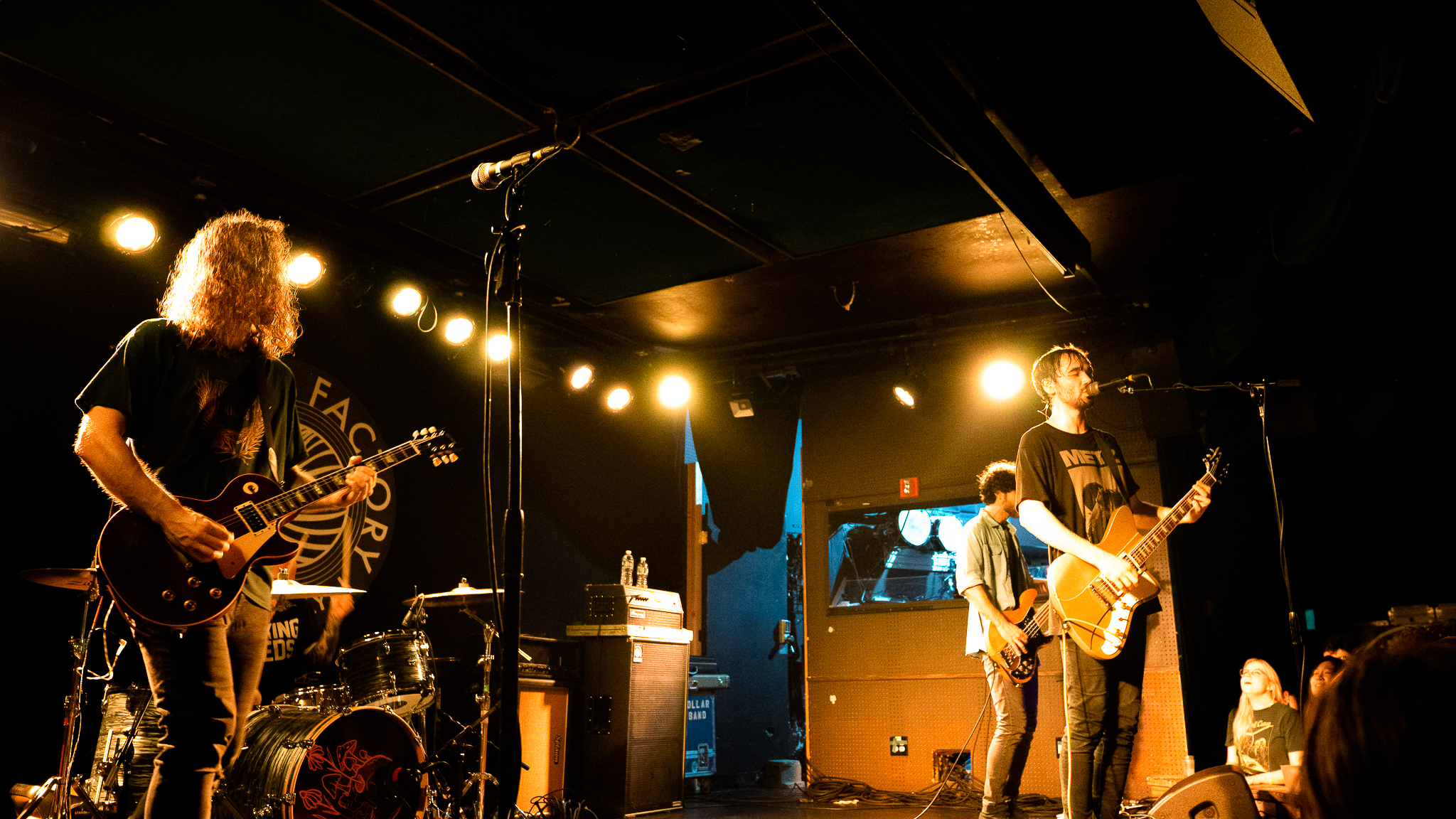 Days after touring as an opener for Mayday Parade, Atlanta-based band, Microwave has jumped straight into their own headliner bringing along Elder Brother, Taking Meds and Weakend Friends for the ride.  They played a gig on October 8th at Knitting Factory Brooklyn, a roomy New York City venue with a restaurant attached.

Right at 7 pm, Weakend Friends a female led band from Portland, Maine hopped on stage and they did not disappoint! In the orange, moody light, the trio dove right into their set. Lead singer Sonia Sturino brought her all to the stage with a sticker on her guitar displaying “pro-choice” as bassist Annie Hoffman danced around, getting the crowd hyped up almost right away with their bubbly personalities. Part way through their set, Annie talked about how when she was sixteen, she played at the venue and how it was so cool for her to be back. One of the songs they played was their newest single, “Quitter”, the title track for their upcoming album. A large portion of their set consisted of new songs from the album and were all great to hear. They performed songs from off their debut album, Common Blah, too. Overall, the band’s amazing stage presence brought fantastic energy to everyone in the venue. Their set was an all around good time and they made for an awesome opener.

Next up to the stage was Taking Meds, a four piece band hailing from the Brooklyn borough itself. It was super exciting to see band playing a show in their hometown. Lead singer Skylar Sarkis joked around with the crowd and talked about their upcoming album that will be released next month. They played their latest single, “Lifesaver” as well as some older songs such as “Sucks to Be Me” which really got everyone going. From beginning to end, Taking Meds totally amped everyone up and were a great edition to the tour.

As the venue continued to fill in, so did the anticipation for Bay Area based band, Elder Brother. Right as they took to the stage someone shouted, “well, it’s time to get sad” which lead singer Dan Rose then replied “we’ll get there, not yet though”. They played a few songs off of their newest album, I Won’t Fade On You, including “OK, Alright”. Part way through the set, Dan talked about how he was glad to be back and clearly the crowd was, too. One of the songs in the middle of their set was “Throw Me to the Wolves” which brought a wave of emotions to fans. Regardless, fans sang along and everyone went through it together. They played a few songs from other albums which got everyone hyped up again. They then went on to close their set with the heart-wrenching hit, “Who’s Gonna Carry You Home?”, but everyone still had a great time even if that meant they weren’t going crazy in a pit.

Finally, it was time for Microwave to play. The venue filled in almost fully as they took to the stage. Just when everyone thought they were about to begin their set, it turns out it was just a tease because all four of the guys took off their gear and went backstage. A few minutes later, the lights went out and they came on. Right as the lights rose, front man Nathan Hardy led right into “Leather Daddy” off their 2019 album Death is a Warm Blanket. Already, a pit was forming. During their second song, “Lighterless” people started to try and surf, but to no avail. The crowd wasn’t quite dense enough for it, but the pit went hard. Mid-set, Nathan said there will be new music in Spring of 2022! Bassist Tyler Hill and rhythm guitarist Travis Hill went crazy throughout the whole set as drummer, Tito, went wild on the drums. Even during the somber songs such as “keeping up” and “Something Right”, bringing some people to tears, everyone was jumping and screaming the lyrics back at the top of their lungs, I don’t think there was a singular point where the pit wasn’t open, either.

It was truly an amazing night in Brooklyn, especially with Microwave being in town. Now that live music is coming back, this was a lineup for the books and all four bands definitely have some great stuff in store for the future!