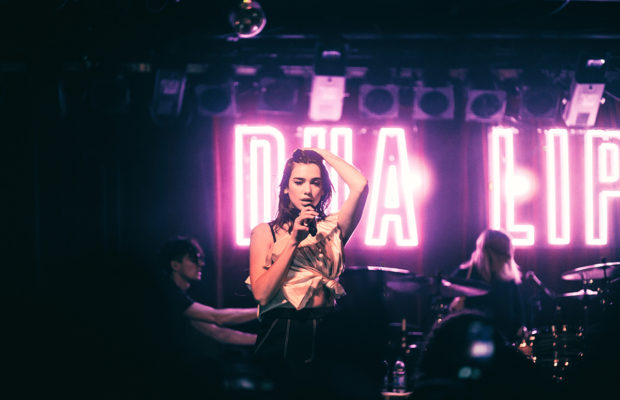 Dua Lipa entered the music scene in 2015 with her debut single “New Love”. Since then she’s refined her “dark-pop” sound, toured the world, and released a series of breakout songs. Her Boston show falls in the middle of a North American headline tour and in anticipation of her debut album, due out on June 2nd.

As temperatures dropped below zero, an extensive line, comprised of college students and enthusiastic teenagers, began to form outside of the Paradise Rock Club. The doors to this venue stand a mere block and a half away from Agganis Arena, where Dua Lipa performed alongside Troye Sivan in November of 2016. However, on this cold March evening the British pop singer returned to Boston for a more intimate concert.

When lights dimmed and the house music faded, the crowd erupted into chanting Dua’s name with a tone of fervent excitement. As the 21 year old musician burst onto the stage these cheers only grew louder. If the dedication of her fans was any indication, Dua Lipa was sure to put on a triumphant show; and she did exactly that as she passionately performed to a sold out crowd. Each member of the audience sung along with her; even to the newly released Martin Garrix collaboration “Scared to be Lonely”.

Throughout the concert she captivated the audience with songs like “Hotter Than Hell”, “Last Dance”, and “Blow Your Mind (MWAH)”. With the night drawing on, the amount of energy filling the Paradise Rock Club remained consistent, even as Dua transitioned into the slower tempo-ed “Thinking ‘Bout You”.

Dua Lipa continues her tour of the United States, with the support of Ro Ransom. If you find yourself in the vicinity of one of her shows, I strongly implore you to stop by and experience the vibrancy of her concert first-hand.