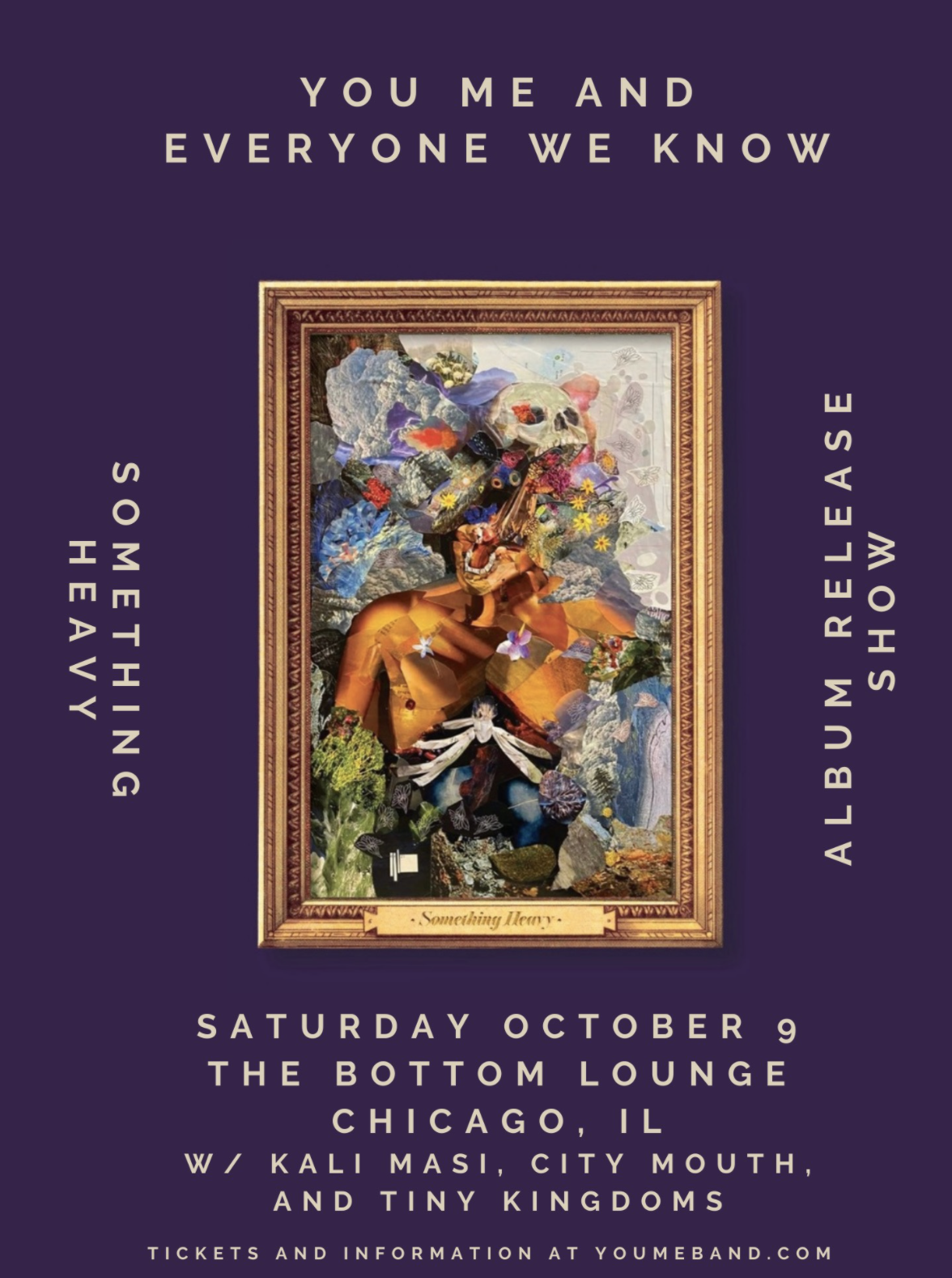 Words by Tony Smith
Concert poster courtesy of Reybee, Inc. and You, Me, and Everyone We Know

The last time You, Me, and Everyone We Know played in Chicago was their “farewell” show right before Valentine’s Day in 2017 at REGGIE’S. This was a bittersweet holiday for their fans. I was lucky enough to be able to attend both that show and their return this past weekend at Bottom Lounge to celebrate the release of their new full-length album Something Heavy. Supporting the show were Chicago locals Kali Masi, City Mouth, and Tiny Kingdoms.

They kicked off the show with a playthrough of Something Heavy followed by a tour of throwback hits. Vocalist Benjamin Liebsch (they/he) tried their best to keep his energy high throughout the show. They let the crowd know early on that they were suffering ongoing side effects from a neurological disorder called dysautonomia. Dysautonomia is described as “a dysfunction of the nerves that regulate involuntary body functions, such as heart rate, blood pressure, and sweating” with symptoms including an inability to stay upright, dizziness, vertigo, and fainting, fast, slow, or irregular heartbeat, chest pain, nausea, and more. Despite the handful of times he existed side stage to throw up or grab a cold beer to use solely as an ice pack (Liebsch has been sober for over 10 years now), they delivered a full set.

That achievement alone is quite remarkable, but he did admit they would not be touring anytime soon. At least not until Liebsch is able to sustain their health to a degree that would allow touring to be less painful. Until then, you can expect to see one off shows pop up in cities with their highest demand. It’s not surprising that Chicago was first on their list, despite not being from this city, they have had a long time cult following and friends here.

Speaking of friends, Zech Pulister (he/him), formerly of Chicago bands Sleep On it and Bonfires, joined on stage to lend his voice for I Can Get Back Up Now and this was special as Pulister had also done guest vocals for the same track at the Farewell show in 2017. Liebsch and Pulister wore matching “Retiring Cult Leader” t-shirts in 2017 and watching old videos back, you can hear the emotion in Pulister’s voice behind thinking it was his last time seeing and performing with his friends. His extreme joy to be on stage with them once again on Saturday was infectious.

A highlight of the show was Livin’ Th’ Dream amongst the old hits on the back half of the setlist. An old fan favorite featured on both Party for the Grown and Sexy and with revised production on Some Things Don’t Wash Out the crowd was louder than ever. There is something so personal about growing older with your favorite music and Livin’ Th’ Dream strikes the chord of nostalgia in YMAEWK fans.

There is no denying that You, Me, And Everyone We Know never fail to put on a memorable set and as Liebsch simply put it, “you just can’t kill this motherfucker.”

Check out Something Heavy where you stream music or here.