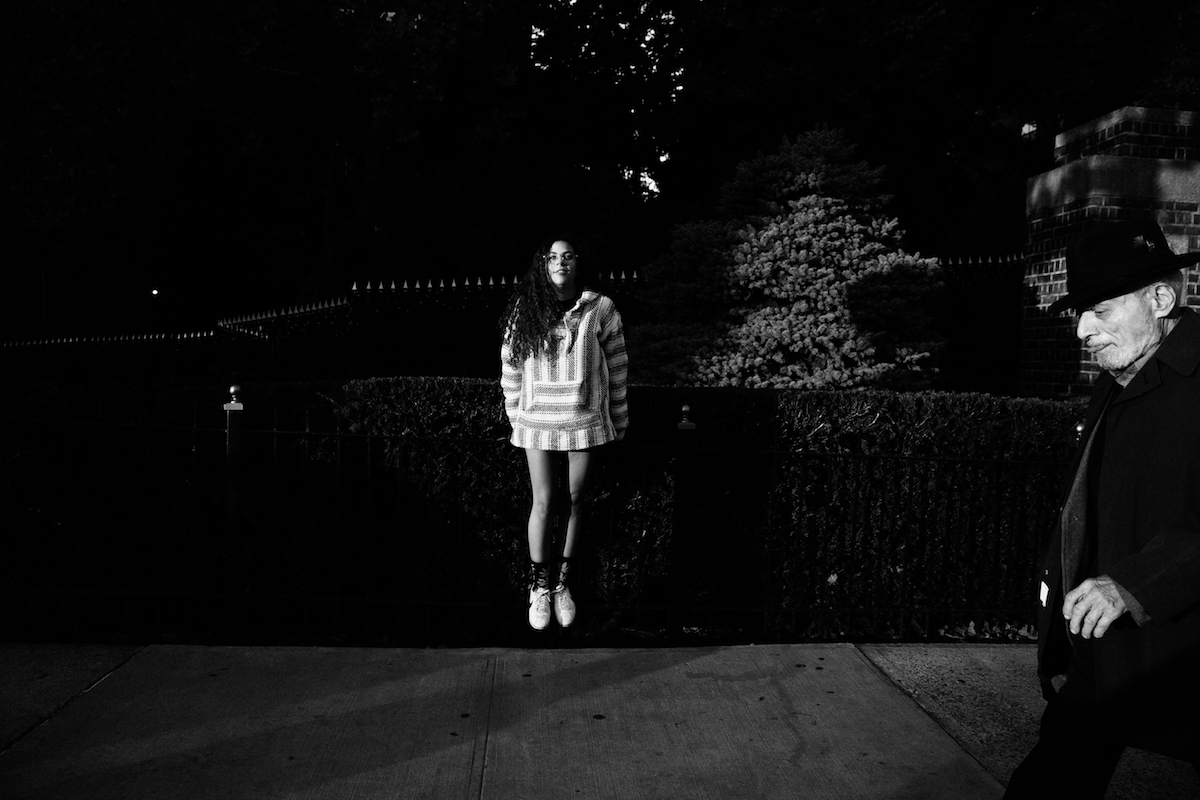 Miami singer-songwriter Julia Bhatt, with a voice that has been compared to Amy Winehouse and Regina Spektor, has been garnering heaps of praise from media outlets such as Earmilk, Apium and pInkwifi, and being hailed as a buzz worthy artist to follow.  Born in Boston, MA, Bhatt’s family moved them to Miami when she was a young child and she was exposed to various genres of music, from classic rock, American songbook standards and bossa nova beats.  Having written her first song (about pizza and ice cream) at the age of 6 and won a role in school in a rendition of “The Wiz”, a love for music music has always been in her blood.   Attending numerous concerts as a child with her family that included The Beach Boys, No Doubt, Sting and The Rolling Stones, this mix of different genres of music helped to shape her into the artist she is today.  With music that is engaging, fun and infused with great beats,  her lyrics are an honest reflection of teenage life in the diverse city of Miami, as well as her ongoing struggles with mental health.  Since 2016, Bhatt has been performing locally in Miami and was set to head out on her first tour with Mutlu this Summer before COVID-19 hit.  Working with producer and mentor Elliot Jacobson (Elle King/Ingrid Michaelson/Verite), Bhatt recently released her latest single “Miami”, a retrospective ode to her hometown. “”Miami” is one of the first songs I ever wrote, and the reactions gave me the confidence to keep going and actually pursue music for real,” she tells FLOOD who premiered the tropic-pop observation of her hometown in Florida.  “People in Miami tend to be in a hurry, often easily inconvenienced, but the scenery is so calming and beautiful,” she explains.  “The juxtaposition of the soft background and the harsh inhabitants is just interesting to me. Of course, there are many people who are super chill, but you know, this song isn’t about them.”  “Miami” follows her previous singles “I’m Cool”, “Marco” and “Tall”.  Having turned 18 in January and graduated high school in February, Bhatt is well on her way to a bright future!  You can follow Julia Bhatt and stay up-to-date with all upcoming music and news, as well as stream and purchase her music, via the following links.  Photo credit: Kevin Condon.
Facebook | Instagram | Twitter | Spotify | SoundCloud | iTunes/Apple Music | YouTube | Deezer
Your music reflects observations about teenage life in the melting pot of Miami. Having been born in Boston, how old were you when you moved to Miami, and how did the environment, diversity and music scene in Miami influence you, both personally and as an artist?

I had just turned one when I moved to Miami. We are known for being eccentric and, at times, stupid, but there is so much history and culture in Miami that influenced me for sure. The colors and the plethora of different people from all over taught me to expand my horizons and become open-minded, which is important in music, I think.

Your first musical memory is of being overwhelmed to tears at a Shakira concert when you were 4 and you and your sister accompanied your mom to numerous concerts growing up.  Did you know from a young age that you wanted to pursue a career in music?  What has been the most rewarding and challenging aspects of your career so far?

As much as I’d love to say I was overwhelmed with passion and love for music, crying because I was starving and nobody would give me food. I also imagine the loud noises and crowd also had to do with the tears. I’ll be honest, I didn’t think of music as a professional career for a while. I didn’t think I could sing until maybe 4-5 years ago. I was just always interested in music, so the most rewarding things have honestly just been the reactions of people and the words of encouragement. I never thought I’d be good enough, so most of my challenges I put on myself, but the positivity has been the best reward. I’m just happy people like my music.

You have said that you were musically influenced by your parents and sister, who all exposed you to different kinds of music, and that you have Spotify to thank for all of your recent discoveries.  Who were some of the artists that influenced you the most growing up, and who are some of the newer artists you have discovered on Spotify?

Definitely the Rolling Stones and the Beatles, primarily. I think everyone should have that musical knowledge, but not everyone does. In every interview I always shout out 70s soft rock, because there aren’t always solid albums but there are some incredible one hit wonders. Spotify turned me on to bands like Surf Curse and Still Woozy. Many thanks 🙂

I took classes as a kid, which I hardly remember, so I imagine it just wasn’t really at the front of my mind. As I got more confident in singing, I got more confident with pursuing music, and, for me, the best way to write music is in a pairing with a guitar. So I decided to figure it out so it could be useful. Also I adore covers and I used to learn the easiest versions of songs and that helped me learn. I dabble in the piano, but definitely am not amazing.

Since 2016, you have performed locally in Miami!  How do you feel these experiences have helped you to learn about performing and what kind of artist you want to be?  What can you tell me about the Rock For Relief concerts you were a part of in 2016 and 2017.

Performing locally was the beginning of seeing a real response from people, so it was a big push. I was nervous and would never talk and give little preludes to each song saying “sorry if this is emo” or blah blah blah. I’ve learned to relax and have fun with it. If you’re not having fun, they won’t. And if you tell them ahead of time how little you believe in yourself, you’re not really giving the best first impression. Rock For Relief were some charity concerts I used to perform in at my old high school.

Many of your lyrics explore your ongoing struggle with mental health.  When did you first discover songwriting as a way to help you deal with your mental health and express yourself, and in what ways do you feel that it has been therapeutic?

I’m not sure if I ever did it consciously. I never write to say “I need to get my feelings out”. I just write what I’m feeling, and often, those feelings are in turmoil because of depression and anxiety and insomnia and everything else. I get to be on my own and it really just flows out. In that sense, it is very therapeutic. Don’t think, just sing. I get to really understand what I’m feeling, even though it’s not intentional. Just a happy accident.

I mean, I’ve always had the support of my parents, but it was up to me to force everyone to see how much it means to me to do this and that I CAN do this. My family is the type to need facts and a plan. Music is hard to have a plan for. That was definitely a challenge, but somehow we all managed to see that this is a real possibility, and to limit the times I could play or what I could do would only hurt that. As long as I worked hard on normal things and found a way to have balance, there was a lot of support.
You have mentioned not always having much confidence in yourself as an artist.  How has writing and performing your music helped you to build confidence in yourself and your abilities?

As I said before, performing and the positive reactions from everyone really gave me the confidence to keep going.

Well, I can’t sing without keeping my eyes closed so that’s always a difficulty. A lot of people like to do direct eye contact and call and response. That shit makes me nervous. I get told a lot to open my eyes, but I think the music speaks for itself. You don’t need to look into my eyes to know I’m genuine about what I’m singing. Hopefully the performance itself draws people in rather than making a show of my personality and such. I make a lot of jokes, make fun of myself a little, etc to make everyone feel comfortable. As long as people are happy with what they hear and are somewhat interested in what they’re seeing, my job is done.

You recently did an Instagram live event where you played songs and answered questions and have uploaded numerous videos onto your social media pages of you performing songs acoustically. What do you enjoy about performing acoustically? What are some of your thoughts as an artist on the role of social media in music?  Do you enjoy interacting on social media?

I love acoustic. Less chance for error. No technicalities and such to worry about. I’m not the most delicate person, so I’ve also banged my guitar around a LOT, which you shouldn’t do, especially with electric equipment. It’s just easier for me. I like social media, but I’ve had to start posting a lot more. I’m happy with the response but I hate that social media itself becomes a job. I love doing covers, so filming them and putting them online isn’t too hard. My songs get boring to me, and people can hear variety. I think it works out.

What can you tell me about your latest single “Miami”?  What inspired the cover art for the single?

Miami is one of the first real, good songs I wrote, in my opinion. I released it a while ago but I took it down and refined it a little. The art I think works perfectly because that was me, in Miami, as a kid, losing my mind for god knows what reason. I think it’s very fitting of Miami. We’re all on the verge of losing it but we do it with style.

You had your first tour planned with Mutlu in June (which just got rescheduled for next year).  With the Coronavirus pandemic cancelling tours worldwide, what are your thoughts on the pandemic’s effect on the music industry?  What are your plans for the summer since the tour has been postponed?

Obviously lots of shows and tours are being cancelled, which is brutal for artists, especially the smaller ones who have JUST gotten this opportunity. I’m happy that people are still making an effort to interact on social media and do live stream shows, because otherwise a lot of these people could go under. My plan for the summer is to quarantine if that’s what it comes to. Anything to end this.

Who knows. Let’s see what mother nature does, and then I’ll make a move.