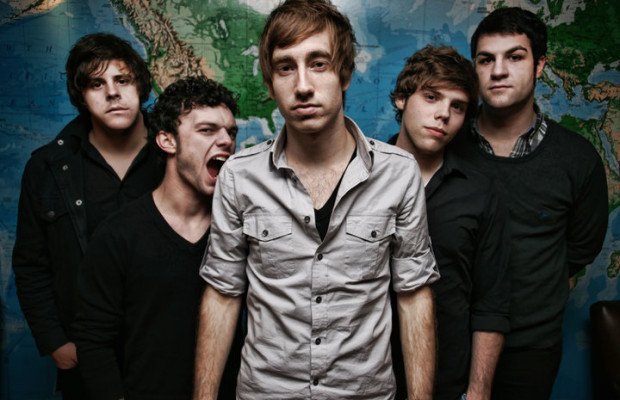 How much of a part did music have in your life when you were in high school?
When we were in high school, we spent a lot of time in the band room. All of us were involved in the music programs at our schools including high school band, jazz band, etc. We also all had our own bands outside of school, and that’s when we started to figure out that this was our passion and something we wanted to pursue as a career.

What has been the craziest tour you’ve been on? What made it so crazy?
The last tour we just finished with Mayday Parade was the craziest tour we’ve been on. All the shows were absolutely phenomenal! There were hundreds of kids every night that just wanted to be around live music and hang out, and that’s what being involved in a music scene is really all about. The bands we were out with (Mayday Parade, A Rocket To The Moon, and Sing It Loud), were some of the coolest dudes we’ve ever had the pleasure of touring with, and we definitely got wild and had too much fun.

If you had to describe Sparks The Rescue’s live performance in one word what would it be and why?
I would describe our live performance as “frightening.” that’s actually more of an inside joke amongst us as band members cause we scare eachother on stage every night, but it’s only because we rock out as hard as possible. We like to think of ourselves as a really fun live band with high energy.

Do you ever play your own songs on Tap Tap Revenge 3? What’s your high score?
I have tried to play both Vampires and Autumn on TTR3… needless to say I am terrible haha. It’s still one of the coolest things though! Lots of kids that come see us play live only know us because of that game, which goes to show how something small can go a long way. We are really greatful to be a part of that.

What is your favourite thing to do on days off of tour?
We try to relax on days off, but recently on tour with The Morning Of, we had the opportunity to all go to Disney World in Florida..which was amazing. We also like to hit the beach if it’s near by, and maybe play some ultimate frisbee!

What is the songwriting process for Sparks The Rescue like?
Alex usually comes in with song ideas like a guitar lick, or a verse/chorus, and then we run with it. Sometimes songs can come together in a few minutes, and sometimes it takes days.

Did you attend Warped Tour growing up? What was the experience like?
We used to take road trips to go see Warped Tour in high school, and Alex was in a band that followed warped one year. It’s one part of summer that almost every teenage kid looks forward to, so we are very honored to be part of the best musical summer camp this year!

Do you have a message to your fans who are going to see Sparks The Rescue at Warped Tour?
Please come say hi to us at our tent, and come rock out with us while we play! We are going to be hanging out every day trying to meet new friends and hang out with those of you who we already know 🙂

What’s your favourite food to eat while on tour?
We are big candy fans…and unfortunately we are usually consumed by fast food. But when we can save up money and have band cook outs or bbq’s, its absolutely heaven.

Does Sparks The Rescue have any plans after Warped Tour?
As soon as Warped is done, we are heading home to begin writing/recording our sophomore release for Fearless Records…we couldn’t be anymore excited!