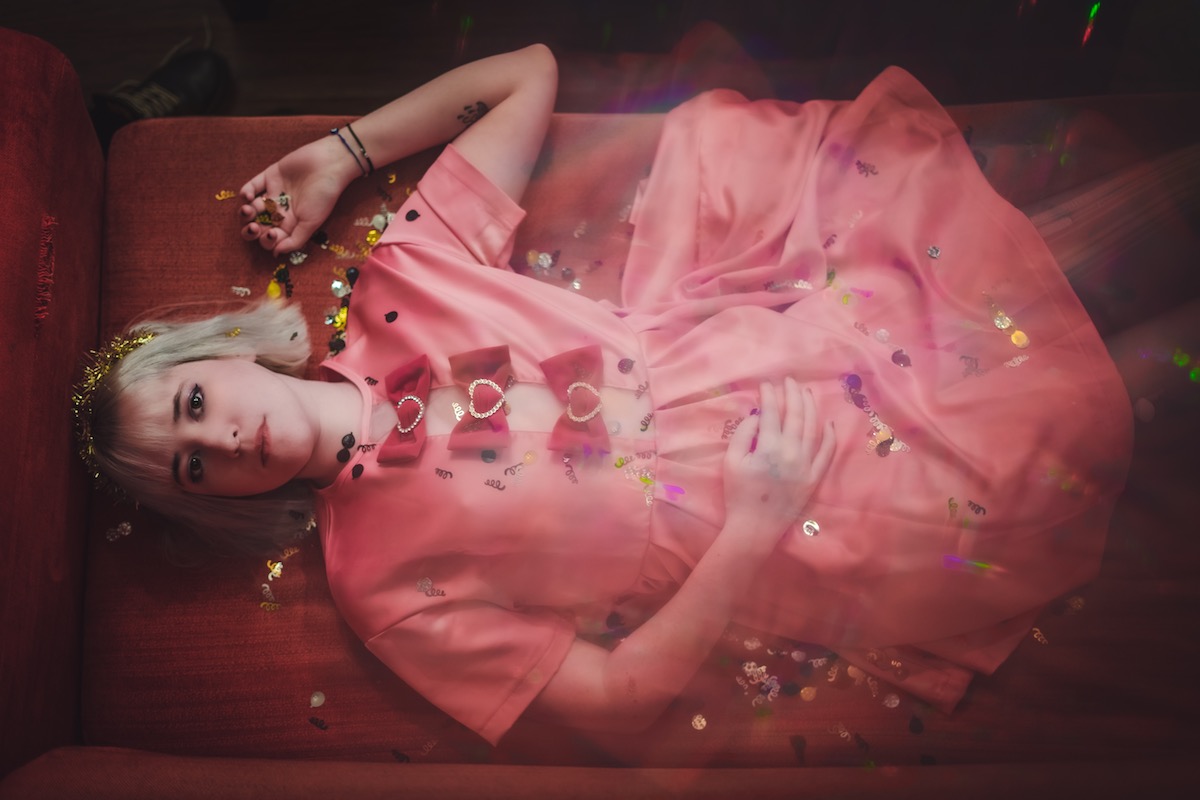 “To me, this EP is a middle finger from a woman who’s over it and finds happiness regardless of the things that constantly try to knock us down,” says Mariel Loveland of NYC-based indiepop band Best Ex to FLOOD about her new EP Good At Feeling Bad, which is set to be released on May 22, 2020 via No Sleep Records and Alcopop Records in the UK.  “I love this EP.  I think it captures the full spectrum of the loneliness and isolation I was feeling at the time I wrote it.  My disillusionment with certain friendships and relationships… my disillusionment with our culture of social media and celebrity… my disillusionment with genuine, unconditional love.”  The second single off the EP, the dazzling indie synth pop “Gap Tooth (On My Mind)”, is about the terrible feeling of getting lost in someone else’s life.  “When I wrote it, I had been living on and off in England for the last few years with my then-boyfriend and his family,” she explains to FLOOD who premiered the video.  “I started to realize over the course of our relationship that my life completely dissolved into his, which I think can happen when you’re dealing with a partner who’s suffering from depression.   I had become so obsessed with caring for him and making him happy that one day, I woke up with an entirely different life in a foreign country.  The future looked fantastic, so when he decided to dump me in a short phone call right before the holidays, it felt like someone had broken in and robbed me of my entire life in the middle of the night.  I spent all of Christmas crying and the entire New Year’s begging my mom to come pick me up from my brother’s house.  A few months later, I wrote this song.”

To make matters worse, her ex was supposed to help her film the video for “Gap Tooth (On My Mind)” but with him out of the picture, it left the production in limbo.  “I thought to myself  “Wow, I’ve moved my entire life to fit into his and he won’t even hold a camera for a couple of hours””. Instead of being stuck in stasis, she bought a camera, hired an all-female crew of pals, and directed it herself.  Good At Feeling Bad is the follow-up to Best Ex’s debut EP ICE CREAM ANTI-SOCIAL (2017), and it’s a balance of the yin and yang of her life from the past two years (with some lyrics dating back to 2015).  Loveland says that over the course of writing this album, she’s gotten a little bit better at existing in her daily life in spite of whatever undesirable and earth-shattering thing is happening.  “It’s like I’ve found a compartment somewhere in my body to just throw all the bad stuff, roll my eyes, and hope the locker still closes all the way at the end of the day,” she explains. “I’m not sure you ever get over the fear of happily waking up to read the news and discovering it’s awful things about people you love, your life, or the world.  But, at this point, when something bad happens, I think, “Oh, of course””.   That’s when I decided to name my EP Good At Feeling Bad.”

With Good At Feeling Bad, Loveland is diving even deeper into indiepop, a move that may surprise some old fans of her former band Candy Hearts.  She’s now creating music that has more in common with Jenny Lewis and Carly Rae Jepson than Paramore.  “We had this gritty, raw energy that I always tried to harness as our superpower,” she says. “Now, while it’s not exactly the same, lyrically though, we still exist in the same realm.  There’s that heartbreak, that rawness, and that tongue-in-cheek demeanor because if I can’t laugh about the sheer amount of times my heart has been broken, I don’t know how I’d survive.”  With this EP she turned to music and wrote what’s basically a “greatest hits of some of the worst stuff that’s ever happened to me.”  You can follow Best Ex and stay up-to-date with all upcoming news, as well as stream and purchase her music, via the following links.  You can pre-order the album HERE.  Photo credit: Natalie Sparaccio.