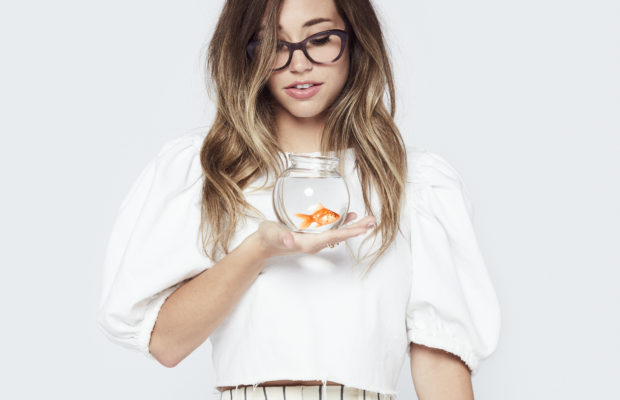 Nashville artist Josie Dunne was always destined for a career in music, having grown up in a creative and art-loving household.  Although she grew up in the suburbs of Chicago, she has since moved to Nashville to focus on her music.  Knowing from a young age that she wanted to be a singer, Dunne has honed her songwriting skills over the years and has been playing shows since she was 13.  At 21 years of age, she has a great deal of music industry experience to help guide her along her path. Dunne grew up listening to her parent’s Motown records, as well as the current music of the day, blending the Motown-era music of her childhood with more modern influences to create a sound that is unique to her.   Having released the singles “Old School” and “Good Boys” to positive reviews, her debut EP, To Be A Little Fish, will be released on June 1st.  Our staff writer, Emily May, recently spoke with Dunne via email about her EP, her love of podcasts and seeing her latest video for “Good Boys” playing in Times Square.  You can stay up-to-date with all of the latest news on her website here, on Facebook here, on Twitter here and on Instagram here.  You can stream her singles on Soundcloud here and on Spotify here and can find her music on Apple Music here.  Check out her latest video for “Good Boys” below.  Photo Credit: Jimmy Fontaine.

Your debut EP “To Be A Little Fish” will be released next week! You had the opportunity to work with Nathan Chapman and Amy Wadge, who have worked with such artists as Ed Sheeran, Camilla Cabello and Taylor Swift. What was it like to collaborate with such amazing people and what can you tell me about the inspirations behind the songs on the EP?

I’ve gotten so insanely lucky to get to work with the people I have. Amy and Nathan are both some of my songwriting heroes! It was incredible working with both of them. They are both really big advocates for writing songs that are true to the artist and their experiences. So, I think a lot of the EP is stuff I’ve really gone through, or things I’ve seen my friends go through. It’s a lot about first love, first heartbreak, and really just growing up in general.

You recently released your “Good Boys” single from the EP, along with an accompanying video. What was the process behind the making of the video? Did you have an idea for the video in mind from the beginning or was there collaboration involved?

I knew right away that I wanted the music video to be me gushing over really nice guys. I thought it’d be funny for me to have guys calling their moms, writing poetry, and doing all kinds of other things good guys would do. We had so much fun filming the video. We just laughed through that entire day. We shot almost all of it on 16mm film, which is why the coloring looks so cool, too. That might be my favorite thing about the video.

I saw that the video played in Times Square after it’s release! What did it feel like to cross that off your bucket list?

That was so amazing! I didn’t know it was going to play, so one of my Atlantic reps face-timed me and just showed me it playing and I was freaking out. I was shaking for 2 hours after, just so excited. That was the best day ever!

Your video for “Old School” has been in rotation on Nickelodeon’s “Fresh Faces” video playlist! How has the response been to having your video featured to that audience? I also saw where you visited the Nickelodeon studios recently. How was your visit?

The Nickelodeon folks have been so nice to me! They are amazing! I can’t believe they’re playing “Old School”. I grew up watching Nick, so them playing the video is another big bucket-lister. Hopefully next time I go in the office, I’ll get slimed – Haha!

What was the idea behind your “Good Josie” vs “Bad Josie” playlists on Spotify?

In the music video for Good Boys, I kind of play two different characters. One is just normal me and the other is like the “bad girl” version of me. As “Bad Josie”, I am smoking cigarettes, knocking over signs, and causing all kinds of trouble so I wanted to make a playlist that represents each different character. I made the playlists just really for fun to make fun of myself in the video- haha!

I read that you are a huge fan of podcasts. What are some of your favorites?

Yes! I’m really into podcasts. I listen to a little bit of everything, but my favorites right now are “And The Writer Is” which is a songwriting podcast and “How I Built This” which is a business podcast. I always really love “Radio Lab”, too.

Your first single, “Old School”, has been described by you as the heart of the EP and the inspiration for the other songs. What do you think it is about “Old School” that makes it such a vital part of the EP?

It was the first song I wrote that I felt like nailed my sound and what I wanted to say. The rest of the EP was written around that song. I think the track is the perfect blend of pop and that ‘old school’ (no pun intended) Motown sound that I grew up on. Plus, the lyrics are fun and happy, which is usually what I try to go for.

Now that your EP is about to be released, what’s next for you?

My goal is to start touring as soon as I can. Playing shows is SO much fun for me so I’m dying to get out and start doing more and more of that.