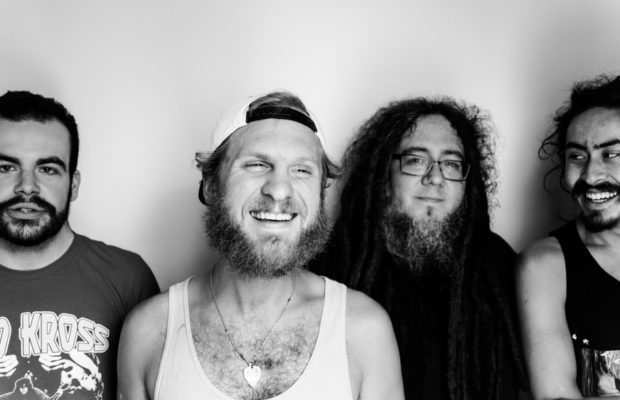 Over the course of a decade, Maryland ska/reggae/punk band Bumpin Uglies have risen from local Annapolis favorites to the national stage.  With a heavy touring and recording schedule, the band has amassed quite a passionate fan base through DIY and grassroots efforts.  With a list of musical influences that vary from Bad Religion to The Beach Boys to Sublime, the band has blended all of these genres into their own unique sound and have drawn eclectic crowds to their concerts and festival appearances.  The band will be releasing their latest album Beast From The East on April 6th and are currently in the midst of their spring tour ahead of the release. Our staffer Emily May recently sat down with singer Brandon Hardesty, who answered some questions about the band’s DIY approach to building their fanbase, how he stays inspired, the band’s upcoming album and summer festivals plans.  You can stay up to date on all news and tour dates on the bands website here and on the bands Facebook here.

EM: You are currently in the midst of your spring tour. What have some highlights been?

BH: We just did our first headlining date in DC and it was a sold out show. Had our horn section at the gig and the energy in the room was intense. That was a personal highlight for sure. Had another sold out show a few weeks ago in Asbury Park, NJ that had a pretty similar vibe.

BH: It’s hard to put that into words but I’ll give it a shot. I’ve always written songs from a very personal place, whether it’s something that I’m personally experiencing or something that I read or watched that made me a feel certain way. I started seriously writing songs when I was about 21 and I’ll be 32 this April. Free Candy, our first album, is very much about what my life was about in my early twenties. I was working a restaurant job 40 – 60 hours a week, I was half-heartedly working on a bachelors in finance, and I was getting my first band off the ground. I was single and lonely and didn’t really have any idea who I was as a person. At 32, I’ve been touring for 7+ years. I have a wife and a dog and a home, and we’re trying to start a family. I’ve got a pretty good idea of what I’m about as a human being and I’m constantly working to improve on that both personally and professionally. It still trips me out that I get to refer to music as a profession, but that’s what it is at this point and I take it very seriously. The music has changed as I’ve changed as a person. These days I write a lot about touring because I’ve spent roughly half of the last seven years living in a van on the highway. I write a little more about politics and social issues. It’s a weird time for humanity, especially living in the United States, and it’s just what gets my juices going as a writer. I still write a lot about love, but these days it’s less about heartbreak and more about companionship.

EM: You are continuously writing and releasing new material for your fans, as well as touring consistently. How do you stay inspired and energized to keep up with such a fast pace? What do you love about touring and being on the road? What do you do for fun when you have down time?

BH: It looks like I may have gotten a bit ahead of myself on question 2, but I’ll try and expand on that. Exercise and diet help a lot of with staying energized on the road. Cutting back on the booze. Anytime I’m struggling with inspiration I try to read a book, watch a movie, listen to a podcast / album, or call a friend to catch up. I feel like sometimes the best stories are ones you hear from other people. The best part of touring is playing the shows and seeing the growth in the audiences, particularly how they respond. It’s always been a constant growth, but it’s really started to take off over the last 2 years and it’s been exciting to be a part of it.

EM: You have a wide variety of musical influences, including ska, reggae and punk rock. Have you found it challenging to blend all of those styles together to create your own original sound or did it happen naturally?

BH: It’s always been pretty natural. I try not to force things. I feel like anytime I try and force something it comes across as disingenuous.

EM: You guys have a very DIY ethic and grassroots approach for building your fan base. What is it about the DIY/grassroots band approach that you find appealing? Do you feel that it has given you an advantage as a band?

BH: It’s not something we intentionally set out to do, it just kind of happened organically because that’s what we’ve always been about as a band. We’re not out there to look cool or pretty, we just want to write dope music and play it to the best of our ability. The only way that’s possible is with fans who buy tickets and merch, so I’ve always gone out of my way to talk to people at shows and on social media to let them know how much we appreciate them for their support. It baffles me how many musicians think that shit is above them because with out fans you literally don’t have a job, you have a hobby. I think the result of that mentality has given us a huge advantage as a band because our fans are as invested in our success as we are. They promote us to their friends, they drive and fly crazy distances to catch shows and festivals, they let us crash at their houses and cook us food. It’s incredible. But most importantly, they tell their friends about us and bring them into the family. People see the vibe and see what we have going on and they wanna have their whole group be a part of it. That’s the thing that’s really started happening in the last two years, and the growth has become exponential as a result.

EM: I read that you have an acoustic series called Songs From The Basement. How did that come about and how do you decide which songs to cover?

BH: I started doing that about four years ago now in an attempt to grow our YouTube channel. I’ve always been super comfortable just singing with an acoustic guitar, and I really enjoy listening to acoustic music, so I figured it would be a cool thing to put out there for fans. I decide what to play based solely off what I’m doing at that period at acoustic shows. If I think something sounds particularly good in a live setting I’ll usually record a video of it for the series.

EM: I love the Where The Wild Things are style of illustration for your new album cover! How did that idea come about and how did you come to work with Nick Kubley Illustration for the artwork?

BH: Thanks! We came up with the name for the album first and thought it would be cool to mix that vibe with the vibe of a Maryland summer for a visual. Nick is the drummer for Passafire and we did some touring with them in 2017. He does great work so we were stoked when he agreed to take on the project.

BH: I really like City by the Bay and Optimism in F#. I feel like both songs are about things that I’ve always written about but they have a more mature perspective about them. I’m really proud of the whole album though, so my favorite tracks fluctuate from day to day.

EM: What’s next for the band? Are there any upcoming festivals or tours you are looking forward to?

BH: We’re pretty much always on tour at this point. We’ve got a bunch of great festivals lined up for the summer. Freakstomp in Ohio and Ziontific in Massachusetts will be great. We’re heading down to Florida on Wednesday to link up with Badfish for a couple of weeks. Gonna be a fun summer for sure.

Check out Bumpin’ Uglies live performance of their song “Warning!” at The Rock Room and don’t miss out on seeing them on tour this summer!