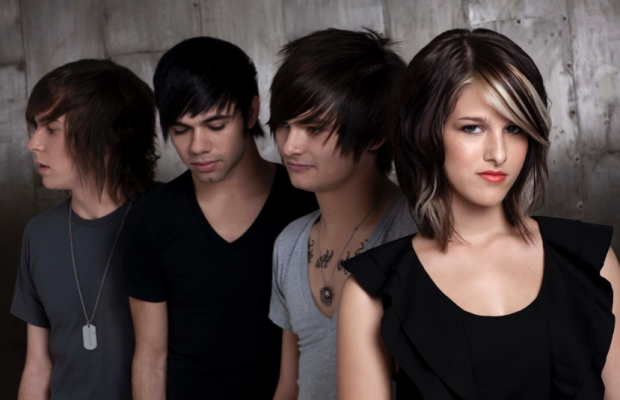 How did the band form?
The band formed a little over two years ago. We got together with our old drummer Elliot and our guitarist Alex. They got together and did some stuff. Somewhere along those lines they figured out they needed a bassist to complete the picture and that’s where I came in.

From the start is this the sound you were looking for? Were you searching for a more hardcore sound or was it supposed to be as pop-y as it is?
No, we’re all pretty much pop kids at heart. I mean, we enjoy playing it. We’re all fans of pop-punk. You know other bands kind of like Third Eye Blind. We kind of just wanted to play what we enjoyed listening to.

Who is your favorite artist?
That’s a hard one. I don’t really have a favorite artist today. I guess if I were to pick a current artist that I’ve been listening to the most… I’ve been really into the urban-pop scene. Just summer music that you can kind of chill out to.

If you had to change your look what would it be? Would you throw away all your skinny jeans or anything?
No way! I kind of changed my look more recently. Not that it’s a major change. I’ve been wearing more ties. It makes me look like a bigger looking person. I cleaned up my hair a little bit. It’s not as big and bushy and all over the place anymore. I got some of a haircut. I wanted to look cleaner and nicer. Just a fun look, y’know?

What would you say your favorite part of performing is?
It’s fun to play live music in general. Just expressing ourselves and showing people our kind of music.

While you’re on stage what are your favorite things to see?
My favorite thing to see is fans enjoy themselves and fans interacting and showing that they’re really having a good time. It’s really fulfilling to see kids enjoying themselves when we’re playing. When kids stand around it’s kind of a bummer because we’re trying to have fun and convey a point and kids standing there make it show that we’re not doing what we’re trying to do.

What is your favorite place you’ve been to?
I don’t know! We’re in LA right now. We’re about to play a show in a couple hours. I always really, really loved LA. I think LA is my favorite place in this country. It’s always so happenin’. It has a really cool vibe. It might be a little too cool but it’s easy to get around. You just want to get around it.

What are some of your favorite things for fans to bring you on tour?
A lot of people like brining candy. I don’t like that, personally. Something that really shows the fan cares about me. If you give me candy you’re just showing that you want to rot my teeth out. If you give me cupcakes you’re just saying you want to give me a stomach ache. I love when people put effort and time into it.

What song in your opinion is the bands best song?
I think the best songs are the songs that are yet to come on the next album. I can’t tell you anything about it but it’ll be soon enough you’ll be hearing about it.

So you think the new album is going to be better than the recent album?
Yes, yes. Absolutely. In my opinion.

When you’re meeting fans are there some things that creep you out more than other things?
Not really. I’m not really freaked out by anything. Some people can be clingy but I don’t like clingy. Clingy freaks me out.

What do you love about meeting fans?
I love how fans really show how much it means to them. When they really express why they’re into the band. I don’t really get nervous while meeting fans. I love hanging out to chat.

What’s the longest you’ve ever stayed out to talk to a fan?
I love to sit outside until the last person is gone and just chit-chat. If someone is willing to sit out there forever then we’re usually willing. It’s something we really don’t forget to do. I think it’s very important.