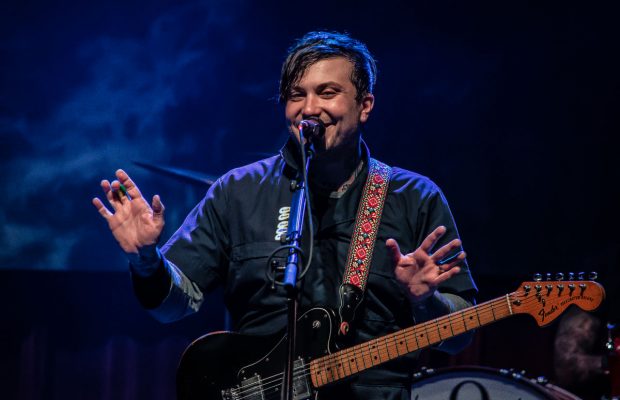 Frank Iero The Future Violents are currently touring in support of their new album Barriers, a deeply personal album for Iero that deals with the aftermath of a near-fatal bus accident that he was involved in while touring Australia in 2016.  The Future Violents, Iero’s third solo project, consists of what Iero describes as his dream line-up- Thursday’s Tucker Rule (drums), Evan Nestor (guitar), Murder By Death’s Matt Armstrong (bass) and the Mermaid’s Kayleigh Goldsworthy (piano/organ/violin).  Although well-known for being the rhythm guitarist and back-up vocalist for My Chemical Romance, Iero has embarked in recent years on a successful solo career.  He has released three solo albums- Frank Iero and The Cellabration’s 2014 album Stomachaches, Frank Iero and The Patience’s 2016 album Parachutes and Frank Iero and The Future Violent’s release this year of Barriers.  The venue was packed this evening with fans who were ready to have have a good time and dance and sing their hearts out.  Iero and his band came out on stage wearing uniforms of sorts, all clad in matching dark blue jumpsuits, starting things off with “Moto-Pop”, followed by “Veins!”, “Mess” and “Young and Doomed”.   Iero chatted a bit with the crowd, telling them early on that this was The Future Violents first headlining tour and thanked everyone for coming out.  He has a great love and deep connection with his fans and expressed his gratitude throughout the evening for their continued support.  About midway through his set, he came to what he described as his favorite part of the evening, singing a song he wrote with his daughter Lily (and recorded vocals with Lily and his other daughter Cherry) called “BFF”.  The crowd eagerly sang along with Iero, shouting about Best Friends Forever.

With a 21 song set this evening, the band carried on with many more songs that included “Basement Eyes”, “Percocet” and “Medicine Square Garden”.  Ending their set with “24k Lush” and “Great Party”, the band left the stage to deafening cheers and screams, coming back out moments later for a 5 song encore.  Their encore consisted of “World Destroyer”, “New Day”, a song that Iero wrote as a lullaby for his kids, “Fever Dream”, “Weighted” and “Oceans”.  Frank Iero and The Future Violents played a long set for their fans this evening, one that had a nice variety of songs from his three solo albums, as well as “This Song Is A Curse” that was featured on the Frankenweenie Unleashed soundtrack.  He and his band put on a fun and energetic performance, engaging the crowd throughout the evening and ensuring they were having a great time.  It was more than apparent that they were!  Iero and The Future Violents had the crowd dancing and singing all night, with a long line forming at the march table directly after the show.  James Deweese opened the show with a solo Reggie and The Full Effect set, chatting with the crowd between each song, telling stories that had the crowd laughing and cheering.  He is a super funny and charismatic artist that had the crowd singing along to every song he sang and eagerly focusing on each story he told.  He had everyone in great spirits and ready for the evening ahead!