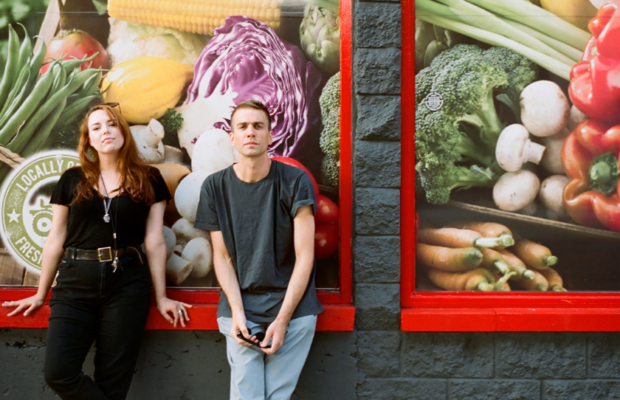 Pollens, an indie pop band originally based in Seattle, now calls New York home.  With a sound that’s been described as a mix of trance, African rhythms, choral composition and alternative indie rock, the band has a unique sound that is constantly evolving and have been compared to Brooklyn band Dirty Projectors.  Pollens began in 2008 in Seattle as a composition project for Jeff Aaron Bryant and Hannah Benn, whose live shows included an array of vocalists, percussionists and auxiliary instrumentalists.  Although Pollens was at one point a six piece and then a seven piece band, when Benn left the group in 2015 to focus on her solo work, Bryant relocated to New York.  It was in New York that Bryant met the playwright, musician and performer Elizabeth May, essentially solidifying Pollens as a duo.  In their own words, “Pollens doesn’t tell stories, they recite lists.  They want their music to be dumb and immediate.  No story.  No Metaphor.”  They are inspired by their love for observation and notation.  With fun and quirky music, they are definitely a band that one needs to experience for themselves!  Our staff writer, Emily May, recently chatted with the band via email about their latest EP, “Mister Manufacture”, how the two met and the transition from a multi-member band to a duo.  You can stay up-to-date with the band on their website here, Bandcamp here (where you can also pay what you want for the latest EP), Facebook here, Instagram here and Twitter here.  You can stream their music on Soundcloud here, and Spotify here.  Check out their video for J Train below!

You self-produced and released your latest EP, Mister Manufacture, in October of last year. It’s described as representing the perfect ‘controlled chaos’ that’s found in your hometown of NYC. What do you find inspiring about NYC as a musician?

You can’t go anywhere here without hearing lots of different music at once… and honking… and sirens… and people yelling. There is an ongoing question here of urgency… like, is that loud sound something I need to look at? How about now? Most of the time it’s fine, false alarm, but who has any headspace for subtlety? And it gets us thinking, why do this now?

Jeff- you moved to NYC from Seattle in 2015 and met Elizabeth May while working on an anachronistic operetta. How did you get involved with the “opera” and decide to keep Pollens going as a duo? Did the two of you have a similar approach to making music right away?

Ya… EMay and I both worked on two operettas that I’d written with Mallery Avidon. Theater is a recent accident for me, but I think a lot of that process from those shows informs how we’re working in Pollens. I got really interested in thinking about music from the perspective of a performer and from the perspective of a spectator… and spectacle. And my assumptions about these things are super different from EMay’s. Anyway, it’s super fun to work with folks with a different approach.

Jeff- Pollens at one point had seven members but now it’s just you and Elizabeth. How has the transition been for you? What do you like about Pollens being a duo and what do you miss about having multiple members? Do you feel there are things you can do as a duo that wouldn’t work with multiple members?

What’s awesome and annoying about being two people is both of us kinda need to be doing something the whole time we’re playing… And I have to remember to take a deep breath after certain songs. What’s awesome and annoying about being a big band is that everyone’s contributions want to be small or sparse… and still the sound is full and like, conversational. And whatever, we’ll try other formats I’m sure, but what’s happening in the band right now is sharp.

The cover art for Mister Manufacture has a Pop Art feel to it! Who would you count as artistic influences?

What is the appeal for you of creating music that is simple and immediate?

In a perfect world, all music would be dance music. Moving meditation. Do the dishes. Drink water. If music was dumb enough, I feel like we’d get a lot done.

I noticed on your Instagram page that you tie dye your own t-shirts. Do you design much of your merch?

Ya… so fun. We’re slow to put merchandise together, but designing it and working on it is becoming important to the band.

Elizabeth- you are a playwright, musician & performer. I read that in March you were an artist in residence with The New Collectives hosted by IRT Theater. Do you stay pretty involved as a playwright and performer on the side?

Totally…and The New Collectives is producing one of my shows this fall. For me, theater and music are pretty commingled. I’m always wondering how much theatre I can bring to rock and roll and how much rock and roll I can bring to theatre. It’s something Jeff and I talk about often. As a band, we sometimes change our mind about those percentages, but for me the osmosis is always happening. Music has been a part of theatre for a really long time- It just has never been seen as particularly cool. And I don’t really deal in making cool things, I make things that interest me…and I’m interested in melodies and rhythms, but also characters and costumes.

Jeff- I read that when you listen to music you don’t like to listen to the words. What is it about the music, as opposed to the lyrics, that grabs your focus?

I really think that I like words… at least I spend a lot of time thinking about them. But when I hear a song, I’ll catch the first couple lines… and then I start hearing the voice against the bass and drums… as if the voice was another drum. I have to listen to song a million times to actually hear what’s being said. Most of the time I think I’m just listening to the intent or feeling of a song… like watching a foreign movie without subtitles.

You just finished a short tour of the Northeast and Canada. What were some highlights?

DIY/house-show spots were probably the most fun. Folks at $5 shows seem more open to hang out and chat. And getting to talk to people is decidedly what makes a show fun or memorable.

You recently released your latest single $$$_PSA. What can you tell me about the song?

Nothing that’s not already in there… it’s a list of people and every so often we hear an announcement. At one point we say honey a lot. It’s kinda crunchy and uptempo. I hope someone choreographs a dance to it or uses it in a roller skating routine.

We’re working on a full length record and maybe some music videos… and hopefully be able to support that stuff with more extensive touring. Crossing fingers, lighting candles.