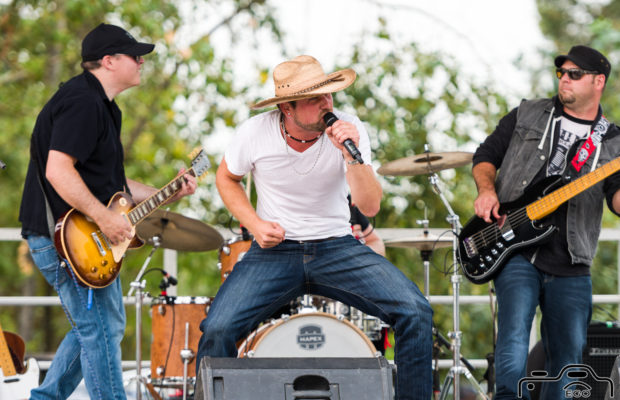 Words and Photos by EG Orren

Emily Taylor Adams Opening up the 6th annual Burnouts in the Sky Show & Shine, Emily Taylor Adams made a return appearance following popular demand from the crowd. She performed a two-person acoustic set and even without her fiddler – who was unable to make it due to prior commitments – it was easy to see why she was asked back … her “Leave the Light On” solo acoustic literally got the attention of the die-hard car buffs enough to stop looking at the cars on display and walk towards the music. Granted the sound that was coming from the stage was incredible and rivaled most high-end productions for large music festivals, but there’s something to be said about the power of a voice and an acoustic guitar, regardless of the genre. Strip away the backtracks and accompanying instruments and experience the music at its basic form. The weather also played a part in making the day entertaining. The Goldilocks Principle came into play with “not-too-hot” and “not-too-cold” and the slight haze from the wildfires that have been burning across BC kept the sun at bay enough that there was no harsh light. Sirius XM and a few country stations across the Canada have started putting her latest single “If I were a drink” into their rotation but it doesn’t stop there. Emily’s heading to Nashville this week to get into the studio with her producer so be sure to follow her on social media for new music and show dates at www.emilytayloradams.com … She openly admits she’s still trying to figure it all out and says “Give me a rock and chisel and I’d be just fine” but don’t let that stop you from showing her a social media “like” or two.

Jesse Allen Harris “He’s making you work for it” … that’s what someone from the audience said to me while I was running around the crowd trying to capture some images from Jesse Allen Harris’s set today. Jesse brings a vast amount of infectious energy, excitement, and entertainment to the stage … and that is not something that can be contained by just standing in front of a microphone singing songs. He covers every inch of the stage and sometimes the speakers. Sometimes even that isn’t enough, and he hops off the stage to high five the crowd. Jesse brought Emily Taylor Adams back up on stage to help him sing his single “Live Forever”. I learned after the show that Emily and Jesse had only met a few weeks ago but they just naturally gel vocally as performers. Jesse invited Emily to come up on stage with him during his set at this year’s Rockin River Music Festival in Merritt BC. With literally no time for them to rehearse beforehand, Emily literally listened to the song for 8 straight hours to get it down and then hopped on stage with Jesse to perform it. Today was the third time singing it … and even the technical challenges Jesse was having with his mic, they seamlessly transitioned to sharing Emily’s He walked around introducing and hugging each of his all-but-one Canadian band members … up until the drummer … poor Seamus got booted so Jesse could play a solo … he went from singing “hold my beer” to the crowd to “hold me mic” to his drummer. I don’t know if Jesse was a “born” entertainer, but he’s proven his musical savvy with the number of instruments he plays and the songs he’s written already so early into his career … I DO know, from what I’ve seen, Jesse belongs on the stage performing for an audience.