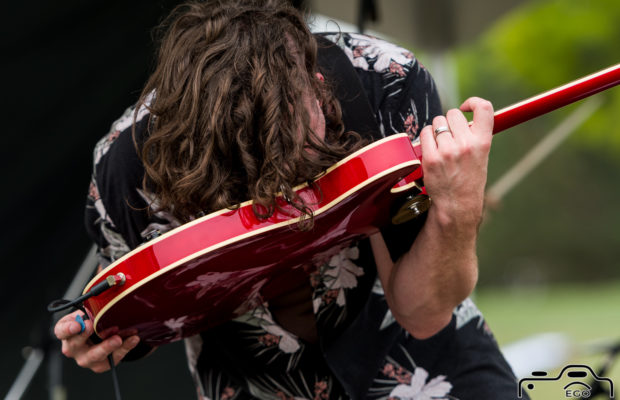 Her Brothers played a special marathon set this afternoon in Cloverdale BC. This almost 2 hour long show was an energized performance from start to finish, in spite of the heat, humidity, and smoky haze from the wildfires burning across the province. Despite the lowered “max headroom” with the tent and stage set up on the Rodeo Fairgrounds, the all still found a way to climb onto – and jump off of – things and just generally not being stationary for a moment once they began playing. To close out their set, they were all standing on the drums or amplifiers, still playing their respective instruments, singing, and ended with a coordinated jump down. According to their press kit, the band has gained a substantial number of its online followers from having seen them live and it’s easy to see why.

There was a great deal of interaction with the crowd as well as each other. Her Brothers “radiates stadium-shaking energy and creates an unmistakable atmosphere”. There is no question whether they own the stage many in the audience not familiar with the group (as it custom at public fairground events) that seemed to be drawn to the stage to watch – young and old alike. Her Brothers are actually 3 brothers whose youngest sibling is a sister, hence the name. They’re like the hair band for the new generation … they all have great hair that pretty much men and women are envious of … and Gabe (lead singer, guitar) as well as Levi (drummer) spend a substantial part of the set flailing it around almost to the point of wondering if they could possibly get whip-lash. Josh (bass) is the opposite in his hair is short but seems to always be perfectly quaffed … He spent most of the set wearing a baseball cap but when he removed it there was no “hat hair”. I may be slightly jealous and envious of the “cool hair gene” they all seem to possess.

The music they create stays in your head because it’s catchy, upbeat, and carries positive messages. With a core of alt-rock, the band fuses elements from 90s pop-punk, 80s dance and R&B, and old soulful jams. They just released the first single, Human, from their upcoming album along with a music video to accompany it on YouTube. The music video gives a tamer version of what to expect at a concert in terms of on-stage activities, but the sound and the music is quite on par with real life. I’ve had a few people tell me in the audience that they already have the song stuck on loop in their head, even though it hasn’t been out a full week yet. Next song from the album is scheduled to be released September 10th with the album , entitled “Tribe” getting a full release in October with a special vinyl edition. The band has had some Canadian music staples collaborate with them on this new album … among them are Keith Scott (Bryan Adams), Christian Stonehouse (Bachman & Turner).

Check out www.HerBrothers.com for more information on the band, follow them on social media, or just to check out their music video. Her Brothers social media: Twitter: @HerBrothers Instagram: @HerBrothersOfficial. My social media is @PhotoByEGO on all platforms