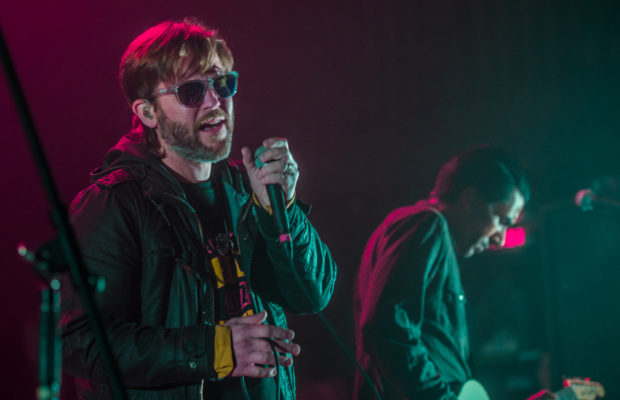 Pop-punk outfit Saves The Day performed at Toronto’s  Opera House on November 6th with openers Kevin Devine and An Horse. The band kicked off their tour earlier this month in celebration of their latest release and ninth album, coincidentally titled ‘9’. Saves The Day first hit the scene with their album ‘Can’t slow down’ in 1998 while still in high school but gained commercial exposure with their 2001 release ‘Stay What You Are’. This album and its predecessors would become staples in the pop-punk genre and their single, ‘At Your Funeral’, would become the anthem of a generation of emo teens.

Having been introduced to the pop-punk genre through this band, I knew this was a show I didn’t want to miss. I arrived in time to watch An Horse play and their set was amazing. They brought their own lights and performed with great energy and they really got the crowd pumped. As we waited for Saves The Day to take the stage, you could almost feel the anticipation rising and nostalgia setting in. The lights dimmed and the crowd cheered as the guys stepped out to play their 2001 hit right off the bat and with the strike of the first chord everyone in the house was singing “The song will become[…]”. It was like travelling in a time machine and going back to being 13 in my bedroom, belting out the lyrics with my older brother. You could tell by how passionately people sang along it was a song they were waiting to hear. I was surprised they would open with that and not save it for later on in the set but it set a level of excitement for the rest of the night. They played a variety of their hits including ‘Shoulder To The Wheel’, ‘Holly Fox, Forget Me Nots’ and ‘Freakish’ and ‘Firefly’, sprinkled in with songs from later records and a few off the new record including,‘Suzuki’, ‘Kerouac & Cassady’, ‘Rose’ and ‘It’s Such a Beautiful World’. My favourite part was the acoustic performance of ‘Three Miles Down’ during their encore.
Saves The Day their tour in the U.S. until the 21st. In case you miss them they’ll be heading out again in the middle of February.