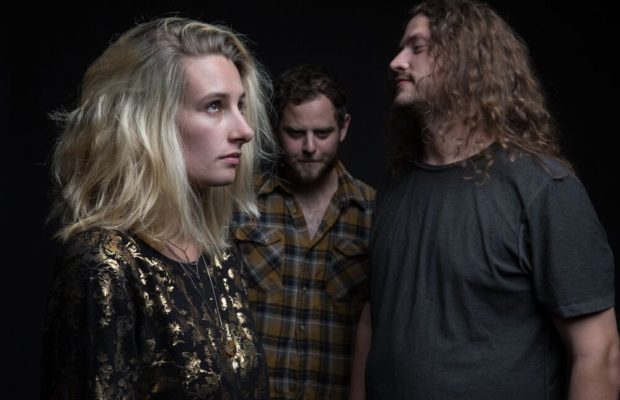 With their latest album, Everyone Else, released in the fall of 2016, Slothrust is currently on their headlining North American tour. We recently caught up with Leah Wellbaum ( guitar and vocals) who was able to give us some insight on the band and the impact of social media.

Stitched Sound: How did you come up with the album name Everyone Else?
Leah Wellbaum: “Everyone Else” is a lyric in the song “Horseshoe Crab”. I think it encompasses a lot of what the record is about regarding the human experience and how people relate to each other and navigate similarities and differences.

SS: What is your most memorable/favorite place you filmed the white rose from your music video for “Like a Child Hiding Behind Your Tombstone”?
LW: There were so many, but I really liked caressing the knives at our friend Katie’s house in Chicago. I don’t like knives, but I did like the way that white rose looked when touching them.

SS: I know that the band is now based out of LA, but how do you think being originally from the East Coast has influenced your sound and everyday outlook on life?
LW: I grew up in Boston and at the time there was a super vibrant music scene. There was a lot of amazing DIY spots and unconventional art and venue spaces. I went to shows constantly when I was in high school. Some of them were actually really frightening in retrospect. Living in New York allowed us to play multiple shows a week and we really cut our teeth as performers in different types of venues. It is a good place for new bands to live if they want to play out as much as possible.

SS: What’s your favorite record shop to visit in the U.S?
LW: There are so many, but Milk Crate in Philly is pretty sick. I like ones that have a lot of old lesser-known records.

SS: What were your musical influences while growing up?
LW: It’s hard to separate influences from what I listened to, but I suppose everything you listen to seeps into your work in one way or another. I listened to a lot of Rilo Kiley, Destiny’s Child, Nirvana, Lauryn Hill, John Fahey, Smashing Pumpkins, Janis Joplin, Chopin…plenty of others!!

SS: In what ways do you think social media has impacted Slothrust, whether positively or negatively, and how do you think your careers would be without it?
LW: I could have a longer conversation about this question, but to answer succinctly I would say that, for us, social media has been a helpful way to reach audiences that would be hard to access otherwise because of where they live. Social media can be fun and silly, and also annoying and tiresome. I’m really grateful to be working with someone who helps us out with aspects of it now because it’s difficult to remember so many details about shows / sessions etc. when you are trying to focus on your work and be present. Without social media, we would carry forth all the same.