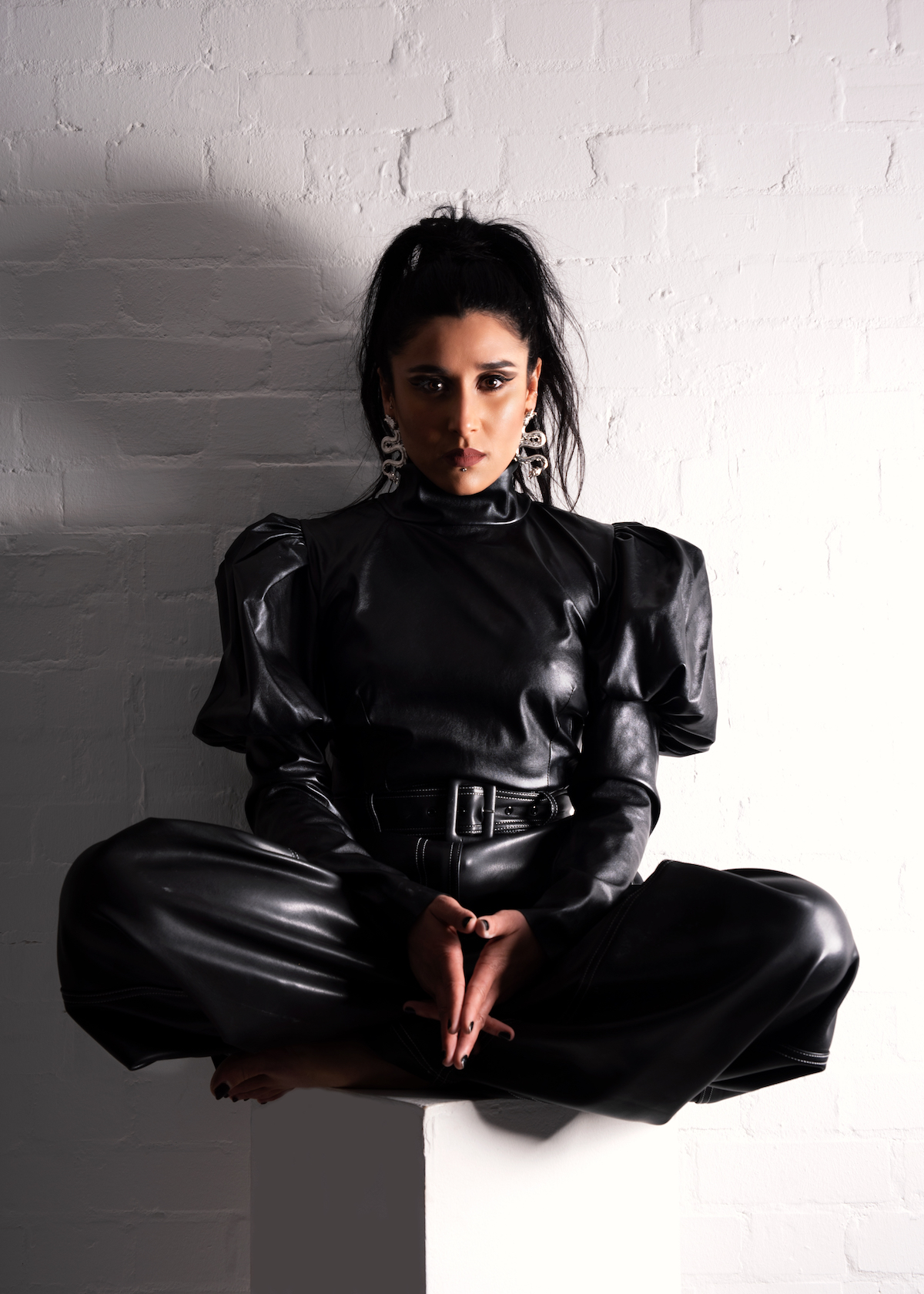 Brighton, UK based singer Veiga Sanchez, better known by her moniker Salt Ashes, has been creating a name for herself in the electronic/dance community over the past several years.  In 2014, she released the singles “Somebody” and “If You Let Me Go”, reaching the top 5 on Billboard and the Music Week Dance Charts.  She won MTVU Freshman and MTV IGGY’s Artist of the Week for “If You Let Me Go”.  In 2015, she released “Raided”, which became a Spotify fan favorite and received support from BBC Introducing and made the playlist on BBC Radio 1Xtra.  She has also lended her vocal and songwriting talents to Kristian Nairn’s single “4 Love” and producer CRUEL’s single “Give It Up”.  With her signature dark songs and melodies heavily influenced by Giorgio Morodor’s disco and epic dark atmosphere, she released her debut self-titled EP in 2016, which quickly gained attention and popularity in the dance music world.  She followed up the EP with various singles that include “Girls”, “Go All Out”, Totally Faking” and an impressive cover of Madonna’s “Get Into The Groove”.  She recently released her latest EP Counting Crosses, which has been hailed as her most dynamic collection of songs yet, taking her unique synth-pop to the next level.  She has also performed across various venues in the UK including a set at Apple’s flagship London store and opened for artists such as Tiffany, Alphabet, Say Lou Lou, Tove Styrke, Bright Light Bright Light, FEMME, NIMMO, and Little Boots.  With plans to write more music and play some shows, Salt Ashes is definitely and “Artist To Watch”!  You can follow Salt Ashes and stay up-to-date with all upcoming music, as well as stream and purchase her music, via the following links.  Photo credit: Kate Vice.

You recently released your new EP ‘Counting Crosses’, which has been described as your most dynamic collection of songs yet and taking your music to the next level.  You have said that your new music has never felt more real, more you and more honest.  What can you tell me about writing these songs and what inspired you to take this more honest approach to your music?

The older I get the more confident I feel within myself which reflects in my songwriting. I care less about what people might think or if people will like it and I just write what I want to express. Those self-doubt thoughts still pop up every now and then but much less now which accelerates the writing process. Fear hinders everything. I’m not afraid to say what I’m thinking or feeling anymore.

You wrote your 2016 self-titled debut album over the span of 4-5 years.  Why do you feel that the songs for the new album came together more quickly?

My debut album was a 14 track album and this was a 3 track EP so that would have some effect on time, but I would say mainly because the debut album was my first piece of cohesive work that I was going to release I wanted it to be perfect. I still want my work to perfect, but actually I’m learning that there’s beauty in imperfections and to let go of more things now.

With your first album, you said that you hadn’t anticipated releasing an album, but rather just wrote songs for the sake of it and planned to release a few singles and possibly an EP.  What was the turning point for you in deciding to release that body of work as an album?

It just got to that point where I had so many songs, it seemed silly not to put a chunk of them into one body of work. I was also at a stage in my career where I was unsure if I should keep making music so I told myself “well, if you do quit music at least you would have a sense of achievement by releasing an album.”

You released a few singles following your first album in 2018 and 2019.  Was that a conscious decision on your part, rather than going right into recording another album?

We all know that people don’t listen to music the way they used to and albums, for independent artists, often don’t get the recognition or platform they deserve, so I felt releasing a few independent singles could resonate more with people. I think there was probably a bit of self-discovery that I needed to do in there too, and by releasing singles it gave me space to do that. I don’t think I was ready to make a cohesive piece of work… I wanted to experiment a little.

You’ve been singing all your life but didn’t start writing songs until you were around 16.  What led you to want to start writing songs?  Do you feel that your songwriting process and inspirations have changed much over the years?

My songwriting process has definitely changed over the years. I’m more open to trying different approaches now and I’m more free with my writing – less poetic and more real I think too. I used to write songs in primary school but it didn’t become serious until I was a teenager.

You have started directing your own music videos!  How did that interest come about and what do you find to be the most rewarding aspect of directing?  Do you tend to have an idea of how you want your videos to look going to each one or do you collaborate with others on ideas?

“Save It” was the first video I directed and I loved it. I had such a strong idea of how I visually wanted the entire piece that it just made sense to direct it myself. It’s difficult being the subject and the director though as ideally I’d want to be watching myself perform whilst filming. It takes much longer this way. With other videos where I’ve had a director on board it’s always been very collaborative; sometimes I may have a rough idea and they will develop that or vice versa. It’s important for me to have a strong connection with the director as I’m putting a lot of trust in them to create something with embodies me and my song.

I’m an extremely visual person, it’s how I best learn so anything visually beautiful or interesting captures my eye. Photography was an opportunity for me to capture mainly people in candid moments. For me, those raw and honest moments that tell a story or evoke an emotion in a single shot is so inspiring. I started taking photos on an old camera of people, family, friends and when I was travelling or strangers. It wasn’t until someone asked me to be their wedding photographer that I thought maybe I was OK at it. I didn’t do the wedding but it lead me to working as a trainee at a photography studio 1 day a week and taking more photos whilst I travelled.

You worked with producers Daniel Fridholm and Rob Irving on your first album and with Louis Souyave on the new EP.  You have said that recording the new EP was a very collaborative process with Souyave, which has made you love the EP even more.  What do you feel that your producers have added to your albums?  What do you love about collaborating with others on your music and are there ever times that you prefer working on music alone?

I feel extremely privileged and lucky to have worked with all the producers I’ve worked with. Each of them have had their own style and vibe that they’ve brought to my songs whilst respecting and paying attention to the direction I wanted to take them. I love collaborating with people because you just never know what you’re going to come up with. One little noise, sound or word that one person puts forward can inspire you in a way that may have never happened alone. It’s a completely different way of writing when you’re in the room with other people. When I’m alone I completely go into myself. Sometimes I just sit and think for hours and then everything just comes out in one stream of consciousness. I definitely need that time every now and then otherwise my brain gets crowded and I almost feel trapped.

In an era where a lot of music is manufactured, have you found it challenging at all to forge your own musical path?

It’s tough. Really tough. But hasn’t it always been? I don’t know. It’s definitely a great excuse but who knows if I’d be at a different place in my career 30 years ago or not.

You recently attended the BRIT Awards!  How was the experience and what were some highlights for you?

It was so inspiring to be in that arena with so many legends feeling the energy. Dave and Stormzy’s performances really blew me away and gave me a little nudge of encouragement that I think I needed at the time.

You recently released your new single “Counting Crosses”, the title track from your new EP.  What can you tell me about the song and writing it with Souyave and the musician Harpy?  I read that the idea for the song came about quickly!

Harpy and I went out, got back at 3am and started messing around on my synths in my bedroom whilst drinking tequila. We made a demo of what we had and I thought it was such a cool vibe that I was playing the demo to everyone to see if they thought it was as good as I thought it was. You never know, sometimes you think something is sick and the moment you play it to people you realise you were deluded!

I’m writing more. I want to get more music out and keep this working relationship with Louis going. Then onto shows and a possible support tour at the end of this year that is all hush-hush at the moment.