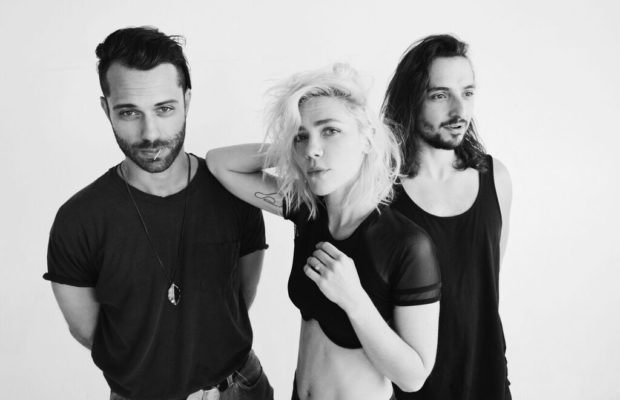 Company of Thieves, after taking a hiatus, reunited last year on the heels of “Treasure”, the bands first new song in six years.  They have been gaining a following at a steady momentum since then, having just finished touring as support for Walk The Moon’s Press Restart Tour. Band members Genevieve Schatz, Marc Walloch and Chris Faller, filled with a renewed sense of energy, show no signs of slowing down.  Our staffer, Emily May, recently interviewed the band, in which they discuss how it feels to be playing music together again, some highlights from their tour with Walk The Moon and the fan response to their new crowdfunding shop!  Check out the interview below and keep up-do-date with the band at their website here and on Facebook here.

Emily: Company Of Thieves reunited last year after the release of Treasure, a single from your recently released EP Better together. How have things been going since the band reunited? How does it feel to be performing and writing together again?

Company of Thieves: It has been so wild- whenever we take just one step toward collaborating and creating something new, life opens up a path for us. Since we got back together we have recorded new songs, met lot of new folks to collaborate with and have been able to visit a lot of dear friends all over the map because we have been on the road for 3 out of the last 6 months! Reuniting has been very healing. We have been writing and performing music together since we were teenagers, so although it is very familiar, we challenge each other to grow because we have been through a lot of phases and we want the best for each other!

E: You just wrapped up a tour with Walk The Moon. How did you all come to open for that tour and what were some highlights?

CoT: We met them backstage at Lollapalooza about 7 years ago because our managers were best friends who went to high school together and had been telling us about each other for years! We have been friends with Walk The Moon ever since and are naturally in alignment with their spirits and the music they make. Some of the highlights from this awesome tour are:

-crying with joy the 1st night in D.C. when their rainbow lights were cast over the audience during their song “Different Colors”

E: You all have such a wonderful and devoted fan base that have stuck with you from the very beginning! How does it feel to be gaining a new fan base and what has that been like for you, to have new fans who are are just now discovering and connecting with your music?

CoT: We are so excited to have the opportunity to play music for tons of new people. It is such an honor to rock with anyone who has an open heart and mind. Thanks to the internet, a lot of people have discovered our music over the past few years and now we get to hang together and celebrate the new songs we are recording- it is a dream come true! And for the fans who have been with us since the beginning, it is a great chance for us all to come back with a fresh take on songs that we have all grown with- it feels amazing to see people embracing change in their lives and hearing our songs with new perspectives.

E: Your EP Better Together was released last week. How has the response been so far? Do you have a favorite song from the EP?

CoT: So far, the response has been a huge wave of love and support! People are sharing the good news and listening and writing us to say hello and send their hearts and smileys! It means so much to us to see our community encouraging new growth. This week my favorite new song has been “Younger” because with this full moon I have needed to clear out some old patterns and ways of thinking to move forward in my life!

E: The band recently started a crowdfunding shop to help support the band’s future endeavors. How has the response been from your fans so far?

CoT: Yeah! This is so much fun for us because we have a direct line of communication with our friends/fans, or “frans” hehehe, and peeps are getting down with the stuff we are putting up in the shop! A lot of people are ordering handwritten lyrics, which is the best feeling, just knowing they care about them and when I get to write them out I feel so grateful to share them in this way. And we have had a few orders of private shows! And lots of postcards and polaroids- it gets so off the cuff and is exciting to send those.

E: Do you have plans to record a new full length album? Are there any upcoming tour or festivals that you are particularly excited about?

CoT: Eventually we would love to record another full length, but for now we are gonna take on small batches of songs more often so that we can keep exploring our sound! We are totally psyched to announce an acoustic tour we are heading out on this May/June!

E: What’s next for the band?

Thank you, we can’t wait to see you on the road this Spring! LOVE

Check out this video of Company of Thieves performing their single “Treasure” at Paste Studios in New York City: