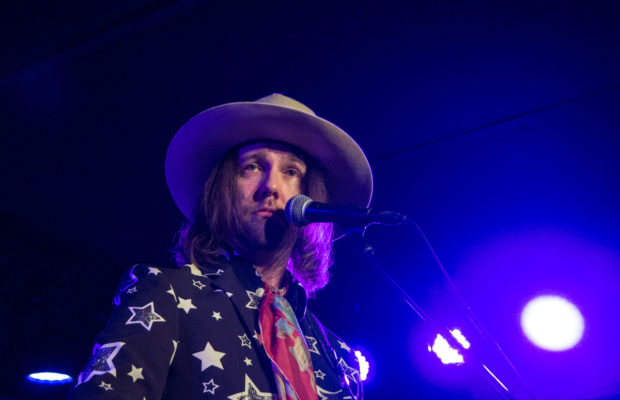 On Wednesday, March 22nd, Aaron Lee Tasjan took the stage decked out in his star themed suit to a sold out crowd at Mercury Lounge, nested in the lower east side of Manhattan on a cold and windy spring night. Tasjan, who is not a stranger to this neck of the woods and has performed at many venues over the years in NYC, now resides in East Nashville, TN, but by the warm welcome from the crowd it was like he had never left. With a new album entitled Silver Tears under his belt that is out courtesy of New West Records, and a recent performance on Conan—on which he performed his single “Little Movies”, he is a force to be reckoned with. Personally, I have known about him for many years—first seeing him perform over six years ago with a band called Taurus at Bowery Ballroom, and I will continue to do so for many years to come.

Tonight, he took the stage with some local friends and some friends touring with him as his backing band— On drums Seth Earnest and Rob Heath, Tommy Scifres on bass, Bryn Roberts on keys, and Brian Wright on guitar. Playing songs off his latest album Silver Tears, he had the crowd in awe and singing along to songs such as “Little Movies,” and “Success.” Tasjan, ended the night with a special encore of “Lucinda’s Room” off of his previous album In the Blazes that brought some of the crowd, myself included, to tears. I thank you Mr. Aaron Lee Tasjan for being who you are and doing what you do.

If he ever is performing near you, whether it is opening for a band—which he does so quite often to such greats as Lucinda Williams or St. Paul and the Broken Bones, performing at a festival —he will be at Bonnaroo, Forecastle, Newport Folk Festival, along with many others throughout the oncoming months, or headlining at a local venue; go see him. You will not be disappointed.