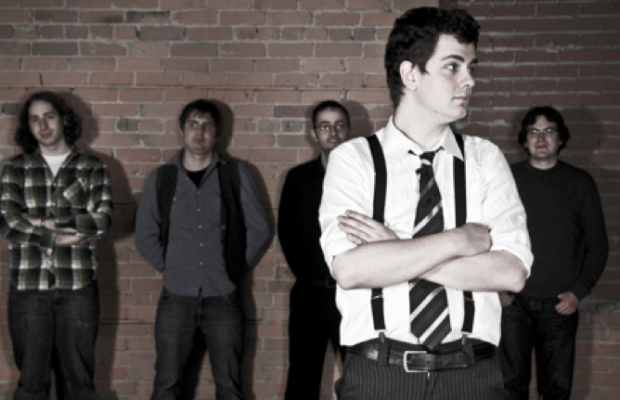 What first sparked your interest in music?
Queen, and later on System of a Down and Modest Mouse. They inspired me to create music on a more personal level.

Has the local music scene of Edmonton influenced you in any way?
I have just recently been getting into the Edmonton music scene. There is definitely some awesome talent in Edmonton and they have a very strong indie, folk scene and I really like that!

While writing songs do you ever encounter something like writers block? How do you overcome it?
Writers block for me comes in waves. I’ll have six months of the most amazing song writing but then have 3 months where I can’t think of anything. I try to separate the time by coming up with new concepts and designs for albums and merch.

What inspires you lyrically?
It’s really hard to say what specifically inspires my lyrics. I generally sit down and think, “What would Rihanna sing about?” And then I do the exact opposite.

Do you have to be in a specific mood or place to write music? Why is this?
I like to walk around with my acoustic guitar and sing nonsense until something clicks. Then I get on my piano and things start coming to life!

What is your favourite song that you’ve written? What is the song about?
I don’t really have a favourite song, but if I had to pick it would probably be The Green Popsicle. I wrote it when there was the huge forest fires in Vancouver and Edmonton was really smoky. When I woke up in the morning the first thing I thought when I looked outside was, “shit it’s the apocalypse.” But to my great joy it was not and The Green Popsicle was born.

How would you describe the formation of a song?
I get right into it, everything at once! Because I do all my recording myself I generally do all the instruments and vocals so I always have to keep in mind how all these elements will go together. I like to start on the piano to get the bones of the song down and then the rest comes after.

How would you describe your live show?
Lots of energy aside from my bass player Connor MacLauglan. He’s the rock and he keeps us all on our feet!

What is your favourite thing about playing a show?
My favourite thing is trying to think of interesting things to do at the show. I was a guest performer for an Edmonton folk band Tanner Gordon and the Unfortunates and I played a piano in the crowd during one of their songs. It was awesome to be able to get right in with the people!

Have you had any crazy things happen at one of your shows? What happened?
The only crazy thing that happens at my shows is every time I play the guitar, I stomp my chord out! That’s why I play the piano.

Is there a message that you’d like to send through music?
The big thing I try and send is no mater how hard religion, society and media try to hammer into our brains that the human race is evil just remember, were all here for our reasons, just live and be happy.

Where do you expect to be in a year forward?
Touring with the Trailer Park Boys and System of a Down with Brian May as a guest performer. It’s gonna happen!