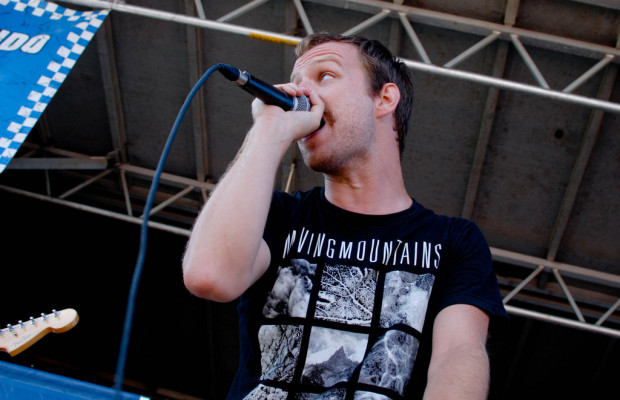 What’s the hardest part of being on tour?
A lot of cliches about missing people popped into my head when I read this question, and that is hard, but you know that’s hard. What you don’t always hear about is keeping yourself in decent health. We definitely don’t shower often, we eat fast food twice a day, we drive overnight almost every night which means we sleep on bench seats in shifts and we live in a van with six other dudes. So, if one of us is sick, everyone is sick. We’ve found that staying healthy is something that has to be seriously thought about everyday. Sometimes, the burger isn’t the right choice. Every now and again, maybe try a salad. Some days, it’s worth the 70 bucks to get a hotel room and let everyone shower and sleep in a bed. The gold bond powder and mouth wash and baby wipes that you consider buying before each tour are always worth it and if you do end up sick, we found that urgent care facilites are much easier to use and much less shady than we expected.

Was there a certain band, concert, or quote, that got you into music?
I guess there were a slew of occasions that could be blamed for me creating music so if you’re leading the witch hunt, you might want to start with Boyz II Men and Greenday as
they were the first two things that I liked seperate from what my parents would put on. Then, make take out Blink 182 for getting me into this genre. Then, head towards Saves the Day and The Get Up Kids for really cementing this as the music I would always love. And then, once you’ve signifigantly punished all of them, you’d be right to go after a local band called Inkling that made me believe that I could be in a band if I wanted to.

What would be your dream instrument to own?
Have you ever seen the episode of Futurama where he plays that clarinet-looking thing that makes music but also creates like mini- movies? I think it’s called a Holophone. That. I’d like to own that.

How did the members of The Wonder Years meet?
Nick, Matt and I all went to high school together and played in a band called The Premier. Kennedy, Josh and Casey went to a separate high school nearby and played in two other bands, Bellwether and Emergency & I. We all played a show together and our friend-groups started intermixing and eventually we all ended up in this band together.

What’s the craziest thing you’ve pulled at a show?
On our first tour in England, Kennedy played a song totally naked. I’ve done some pretty stupid stage-dives off speaker stacks or little balcony areas. I don’t know. I feel like we do a lot of stupid shit but now that I need to recall a specific instance, I’m having trouble.

Who are three bands you’d love to play a show with?
Blink-182, Hatebreed and Hatebreed again.

What genre would you consider the band to be?
I call us a pop punk band. Seems fitting to me. Sometimes, we say “realist pop punk” because of the lyrical content but we’ve been really pushing lately to be considered satanic pop punk. One day. We can dream, right?

Do you ever feel used by your fans?
The only time I think we’ve ever felt mistreated by our fans is when we get messages saying things like “I can’t believe you’re not fucking coming to Boston on this tour” when we’re playing maybe an hour from Boston. We drive, on average, six hours to every show. It’s kind of insulting when you get mad at us for not playing your town when we’re playing pretty fucking close to it and we drove overnight on no sleep to get there.