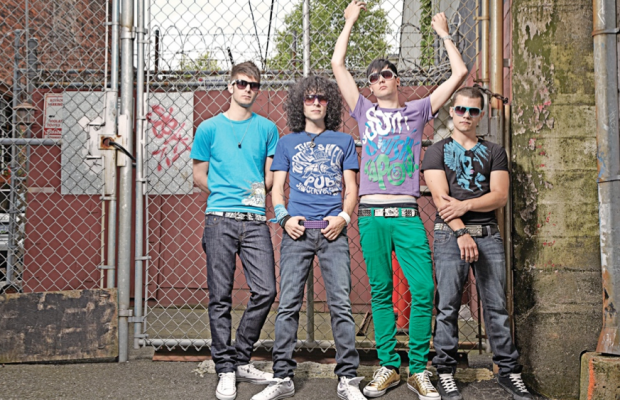 How has your music changed from when you first started the band?
The music has changed a little bit. The difference between the first CD and the second CD is [that] for the second CD, we didn’t really have any help from outside producers. Everyone was really busy with all kinds of other projects, so we just started doing our own thing and the first song we worked on was ”Get Up And Dance.” The reason we did “Get Up And Dance” as our first song was one time we were playing at a club in Ottawa, and our record company rep said “Hey, I got your song coming on at the club tonight” and all these 19+ kids are on the dance floor dancing away. All of a sudden our song came on and it was “Second Chance”, and the entire dance floor was empty. We were like, “Aw shit, we gotta write a song that keeps people on the dance floor.” So that was the idea behind “Get Up And Dance.”

Originally “Get Up And Dance” was going to be a dance project, but then we showed it to the management and the label, and a lot of people just loved the song better than the original Faber Drive. Basically what happened was we recorded our first album in Nickelback’s studio, and then the second album we recorded in my barn. So we pretty much had to learn to record things ourselves. The sound and production is a lot of work. We’re all kind of beginner producers, [so] we had to learn all the stuff. We tried a bunch of stuff and we’re pretty proud of it. We really like some of it, some of it is what we truly are. We really wanted to write some dance stuff so we wrote “Get Up And Dance” and “Give ‘Em Up” with Josh Ramsay [Marianas Trench], and we’re proud of what we’ve got.

Did you expect to achieve as much success are you have now?
You know, it’s one of those things that for me, it’s just a part of life. Back in high school I was always in a band, and I kind of experienced a little bit of fame, it wasn’t anything like the level that we’re at now. We always seem to be recognized and whatever but, it’s so weird to me too because fame for me, it’s not anything I wanted to be. I never wanted to be a musician because I wanted to be famous, I always wanted to be a musician because I wanted to do what I love to do. I always wanted to make music that i loved to play in bands, sing in bands, and write songs. To feel the emotion that I get when I listen to other songs, out of my own songs. So for me, fame is kind of a weird term.

What is your favourite song that you’ve written?
Oh that’s a tough one. I think one that is really really close to my heart is the song “By Your Side.” That’s mostly because I’m writing it about my dad who apssed away in ’95. He was such a hero to me and such an amazing man, all he had was love and he was just the most kind, most loviing person I ever knew. I truly believe that when somebody passes away, there’s alwyas a peice of them with you. It’s like all the memories that I have about my dad are always going to stuck with me and it’s powerful how much of an impact one person can have on somebody’s life and that’s what the song is about.

Another song that we really like to play a lot is “Get Up And Dance.” A lot of people just get right into that song and jump around, wave their hands and dance, stuff like that. I still blows us away that when we do “Tongue Tied” and “When I’m With You” the crowd sings so loud. It’s a huge rush, gives us chills every night.

What’s the craziest thing that you’ve done on stage?
I remember one time we found this huge Wheel of Fortune wheel, I don’t know if this is the craziest thing but it was pretty spontaneous. We played a theatre in Nova Scotia and we found a huge, probably like fifteen feet high, wheel that spins. So I decide that I want to wheel this out, bring up some kids from the crowd. So we bring them up from the crowd, we’re wheeling the wheel and it’s great, and we have the kids some free t-shirts, CD’s, and whatever else we could give them. I’m pushing this big Wheel Of Fortune wheel, and just as it was about to go off the stage, I lifted up to get it over a wire, and the whole thing tipped over, and literally almost smashes into the guitar amps. It was so close, it was one of those things where you’re holding your breath.

Another time we were playing a show in Abbotsford, BC which is very close to our hometown Mission. We were on stage rocking out and all of a sudden some girl throws her bra, and I grabbed it out of the air, and then I was just about to say something. Literally as I’m about to say something, my mom jumps on the stage, grabbed it out of my hand and goes “That’s disgusting!” and throws it back into the crowd. I was so embarrassed, I was like, “Oh everybody say hi to my mom!” I gave my mom a big hug and the crowd loved it, it was funny.

What do you hope to achieve in the future?
We’re involved with a charity called World Vision. A lot of people don’t realize how good we have it in Canada, and how easy life is for us. I mean we all complain, and we all take so many things for granted, but if you go to a third world country just to see how much poverty, and how much struggle it is just to survive through a day, you really put things into perspective. Me and Pritchett went down to the Dominican Republic two months ago with World Vision and it was so weird, it was so amazing that the people there, even though they could have been in despair, there was so much hope in them. We saw kids laughing, happy all the time even though they could be totally unhappy because they were in worn out shoes, they didn’t have a house, they were in tents. This one house we went to, this guy showed us their toilet, and it had no walls, no windows, and no roof. It was literally just a cement cylinder, in a backyard that they would just shit on. It’s one of those things that was like “Wow we really don’t realize how good we have it.”