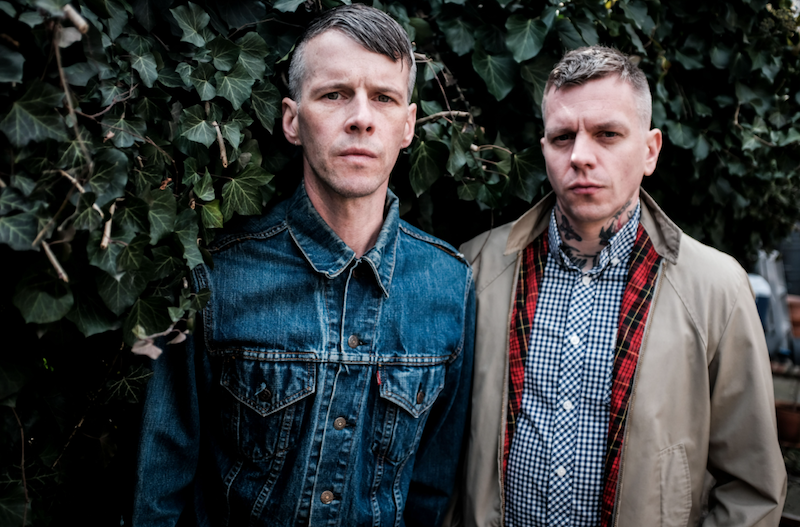 Formerly of the Boston punk band The Explosion, bandmates Dave Walsh and Matt Hock had, unbeknownst to each other, been writing and recording similar songs on their own.  Upon this discovery, they decided to start writing music together and their new band Space Cadet was born.  In contrast the more punk and hardcore sounds of The Explosion, the music of Space Cadet explores their post-punk, new wave and Brit-rock influences.  Although located in Clinton, MA and Brooklyn, respectively, the two friends have made good use of technology to send music files back and forth to exchange song ideas.   Today sees the release of their debut album Lion On A Leash, which saw them recording at Little Eden in Asbury Park, NJ last year with Pete Steinkopf of Bouncing Souls.  Lion On A Leash features guest appearances by Scott Engel, Brian Baker (Bad Religion, Minor Threat), Mike Sneeringer (The Loved Ones, Strand of Oaks), Matt Olsson (Dave Hause, Brian Fallon) and Chris Gonzalez (The Explosion, The Loved Ones).   They have released three music videos, for “Forever For A While”, “Bad Luck” and “Start Running Away”, with plans to release more as things start to open back up, post-Covid.  With plans to release more videos and to write another record, there is plenty to look forward to from Space Cadet!  You can connect with Space Cadet via the following links.  You can purchase their new album via BANDCAMP | WIRETAP RECORDS | APPLE MUSIC.

You both played music together in the Boston punk band The Explosion from 1998-2007 and later realized that you were separately writing and recording similar music on your own that explored your post-punk, new-wave and Brit rock influences.  What can you tell me about coming to that realization and deciding to form Space Cadet?  What has it been like to write (and hopefully soon perform) music together again?

DAVE: Good question. Well, Matt and I have been best buds forever… I think it’s 25 years this year which is so crazy. One of the things that drew us together was our love for British music and culture. So we’ve been sharing that love and respect for that style of music for quite a while, so in that way it was quite natural for us to write together in that way. Matt and I have always written music really well together, so for this project it was pretty easy actually. Hopefully we can play a show soon! We’re really looking forward to it.

Your debut album Lion On A Leash comes out on March 26th.  Having both written songs before forming the band, how many of the songs on the album are ones you had written prior to forming the band and which did you write together?  What can you tell me about working with Pete Steinkopf of Bouncing Souls on the recording of the album, as well as the amazing musicians who played with you?  How did they all come to be a part of the process?

MATT: Technically we had two songs written before we started the band, “Forever For A While” and “Bad Luck”. I sent Dave a very rough demo of “Forever For A While”, which was tentatively called “Space Cadet”. It has a day-dreamy vibe with lots of reverb and that working title seemed fitting. He was stoked on it and said, “we should do a band called Space Cadet”. So, we did. Dave had written “Bad Luck” a while back and, much Like FFAW, it was pretty different than the music we’d played in the past. Side by side, the two songs are very different but somehow work really well together and I love that about them. It’s easy to get caught up in the boundaries of genre and I think we both subconsciously wanted to get away from that. We started sending the songs to Pete Steinkopf pretty early on; he’s an old friend and he was super excited about the project. His studio is rad and working with him was awesome. Because the band is just me and Dave, both on guitars and vocals, we needed a solid rhythm section. Mike Sneeringer and Matt Olsson sat in and both did an amazing job. They tracked all their stuff in two days! Chris Gonzalez, Scott Engel, and Brian Baker also make appearances on the album. It was great to have so many friends involved.

What can you tell me about exploring your lighter rock influences with this album?

DAVE: I laughed when I saw this question, because when you think of lighter rock you might think of Journey or The eagles. Haha… but I think I know what you are asking. Space Cadet is not as punk/hardcore as The Explosion, but for us it’s really quite natural to write and play in this way, with different “lighter”influences. We love it!

You have said that due to safety protocols with the pandemic, you did all pre-production for the album with Pete remotely and were able to start tracking immediately when you went into the studio.  What was it like, for the first time ever, to step foot in the studio with everything ready to go?  What can you tell me about the recording process?

MATT: Yeah, we wanted to be smart about how we approached recording in the midst of all of this. We initially planned on recording a 7” in April, but things were way too uncertain at that point, so we decided to wait. In retrospect, having to push that session back was a blessing in disguise. We had a lot of momentum and the extra time allowed us to write an entire album. We continued to send stuff to Pete, so pre-production was kind of happening concurrently. That helped us have a very clear idea of what we wanted to accomplish once we got in the studio. Tons of studio time can be nice, but we didn’t have that luxury. We were on a pretty tight budget, so there was a sense of urgency that I think benefitted the record. Dave was unable to join us in New Jersey and ended up having to record all his tracks from his home studio in Massachusetts. It was definitely a bummer not to have him there, but it allowed us to track at the same time – another blessing in disguise. I don’t think we would’ve been able to get everything done in the time we had, otherwise. So, it was definitely a unique process, but a cool one.

You recently released the single “Forever For A While”, which you have said was the first song you wrote and was the catalyst for experimenting more and more with other songs and for the band itself.  What can you tell me about the track and how it led to the other songs and the decision to form the band?

DAVE: Yes! FFAW definitely was the catalyst for the group. Matt wrote this one and did a home demo and sent it over to me a year or so ago, and I was just in love with the sound as soon as I heard it. We quickly decided that we should explore further and see what we came up with, and the songs for Lion on a Leash came together fairly quickly.

Space Cadet is comprised of just the two of you.  Do you feel that you will keep the two-person line up going forward, and just bring in other musicians to record, or do have plans to expand the line up at some point in the future?

MATT: The two-person lineup works really well for us and that’s not likely to change. We like the streamlined process, and I don’t think any more voices in the room would be particularly helpful. That said, we aren’t a two-piece, either. We definitely need a full band for live shows and recording. Working with Mike and Matt was great, and we’d definitely do it again if they’re willing.

What can you tell me about signing with Wiretap Records and why you feel they are a good fit for you?

DAVE: Our manager Alex Fang introduced Matt and I to the label and thought it would be a great fit. We had our initial phone conversation with Rob from Wiretap and we were so impressed by his enthusiasm and professionalism, so it was a no brainer for us. We are so happy we signed with Wiretap.  It’s been a great fit.

You both have a shared obsession for guitar pedals!  How did this obsession start for you both and what are your favorite pedals to play through?  Do you seek out certain sounds/effects?  Are there any pedals coming out that you are excited about?

MATT: Sometime late in August 2019, I got a pretty strong urge to play guitar again. I used to have two awesome guitars, a Fender Telecaster ’52 and an Epiphone Riviera, but foolishly sold them years ago when cash was tight. I wasn’t sure what to get and Dave was helping me figure it out. That sent us down a Reverb rabbit hole, which lead to a YouTube rabbit hole where we discovered The JHS Show and That Pedal Show. It was like a whole new world opened up and helped us do some studying for the record. Dave mostly used a Mooer Shimverb, an MXR Carbon Copy and a Wampler Tumnus on the record. He just got a Danelectro 3699 Fuzz, which sounds amazing. My favorite pedal is probably the Walrus Slö ambient reverb, I used that on every song on the record. That’s on my current board along with a JHS Crimson, a Klon KTR, an EHX Small Clone, and a JHS Prestige, which I use as a buffer at the end of my signal chain. Mythos Pedals is releasing an analog delay pedal that seems awesome, so excited for that to come out.

You have released music videos for “Bad Luck”, “Forever For A While” and “Start Running Away”.  What can you tell me about the ideas behind the videos and their overall visual aesthetic?

DAVE: Honestly the ideas for the videos are all courtesy of an amazing video artist by the name of Joanna Bovay. She has an amazing aesthetic visually and a really intuitive sense about what Matt and I’s music is all about. It doesn’t hurt that Matt is married to Joanna and that I’ve been friends with her almost as long as I’ve know Matt. We couldn’t be happier with the work she’s contributed to the band. Joanna is the third member of Space Cadet, and we are so lucky to have her on board.

What’s next for you?  What are your goals for the band, post-pandemic?

MATT: Things seem more hopeful now than they have in a long time, and we look forward to playing some shows whenever that’s possible. In the meantime, we’re going to try and make a couple more videos and write another record so stayed tuned.