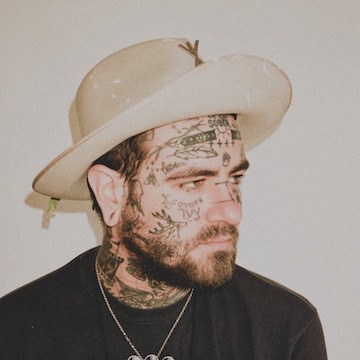 Seattle alternative rock/pop band Fences, the alter-ego of musician/songwriter Christopher Mansfield (vocals/guitar), is rounded out by his bandmates Benjamin Greenspan (guitar/keyboard), Lindsey Starr (bass/vocals) and Elliot Garm Chaffee (drums).  They released their debut studio album Fences in 2010, which made SPIN Magazine’s year end list of “Albums You May Have Missed”,  followed by Lesser Oceans in 2015.  Mansfield’s debut EP Ultimate Puke was discovered via Myspace by Sara Quin of Tegan & Sara who recorded, produced and lent her vocals to the Fences album.  Mansfield also caught the attention of Macklemore and in 2011 he collaborated with Macklemore and Ryan Lewis on “Otherside” (remix) and co-wrote “Ten Thousand Hours” from Macklemore’s 2012 album Heist.   Fences signed with Elektra Records in 2013 and in 2014 Mansfield released “Arrows”, a song on which he collaborated once again with Macklemore and Ryan Lewis.  Fences’ songs have been compared to everyone from The Cure to Hank Williams and they have toured with bands such as Against Me! and Hellogoodbye.  Fences released their latest album Failure Scriptures on June 21st via GRNDVW. The album features a guest appearance by Cedric Bixler-Zavala (At The Drive-In/The Mars Volta) on “Brass Band”.  You can follow Fences and stay up-to-date on all upcoming music, band and tour news via the following links:

You recently released your new album Failure Scriptures.  What can you tell me about the process of writing and recording the album?  What were the inspirations behind the songs?  What led you to release a series of “vignettes” around the album’s release?

Patrick Damphier produced it. I wrote most of it alone in various states (geographically and emotionally). We recorded it in Nashville from the hours of maybe 10pm to 4am. It was an interesting time for both of us.  The vignettes was mostly an excuse for me to shamelessly plug my love for writing.

You have mentioned being influenced by Jack Kerouac, who said that although he wrote ‘On The Road’ in 3 weeks, he was on the road for 7 years.  This gave you a sense of relief, as you take some time to release new music.  You have said that you cannot write about what you haven’t seen with your own eyes.  Do you seek out certain experiences that you wish to write about or do you simply write about things as you experience them?

I’ve certainly destroyed my life for a song. Whether or not this was intentional… I’ll have to ask my therapist.

You learned to play the guitar at 16 and taught yourself by playing jazz chords, since jazz was really hard and helped you to gain proficiency.  You later took lessons and practiced until you developed great skill on the guitar.  How do you feel that foundation has helped you throughout your career so far?

I wouldn’t say it helped my career but it helped my language. My… ya know, my vocabulary. Notes are basically letters and chords are sentences. You gotta be fluent, man.

You went to Berklee College of Music for Jazz, but after hearing your roommate playing folk music you ditched jazz and started writing folk songs.  What was it that attracted you to folk music?

Probably Elliott Smith’s rainy disposition. I was drunk on it instantly.

You wound up moving from Boston to Brooklyn, where you opened for friends and did a coffee shop tour of the East coast before making the move to Seattle.  What were those early days like for you and how do you feel they helped you to get to where you are now?

It was everything… to be cliche, the foundation. Kids now just go put up some whacky shit on SoundCloud but back then we had basements. Girls sitting on washers and dryers cross legged watching you sing as quiet as a damn mouse. It’s all I knew. I miss it.

You started out as a solo artist but have since recruited a band.  What led you to want to make the transition from being a solo artist to playing with a band?

I just do what I feel at the time. Orchestra or alone, a computer, a harp. None of that matters. It’s really about the words.

You recently did a short acoustic tour of the West Coast.  What were some highlights of the tour?  How often do you play solo these days and what do you enjoy about solo sets vs full band sets?

I like looking out the car window when the sun is setting. Solo is nice but sort of scary. If they turn on ya… it’s like getting jumped in an alley, if they love you it’s like the best.

What can you tell me about your latest single for “Same Blues”, as well as the accompanying video?  What was the idea behind the video and what was the experience like in making it?  You have called the video a love letter to Dennis Hopper.  What makes him such an inspiration for you?

You’ve said that your ultimate dream is to someday be an actor, preferably musical theatre.  Did you do musical theatre/act at all growing up?  How did your love of acting develop?

You’ve described music as a constant battle between balancing beautiful and well put together music with more off the cuff music (Manchester Orchestra vs The Stooges).  Do you feel that you have found that balance or are close to finding it?

I think the stooges would be less a sound issue and more an emotional issue. I find the business side and social side to be ultimately chaotic. Music is easy and beautiful.

I read an interview from a couple of years ago in which you mentioned that you were writing a book!  What can you tell me about the book?

A short collection of stories…. yet, a memoir. Sorry Augusten Burroughs, yeah that vibe!