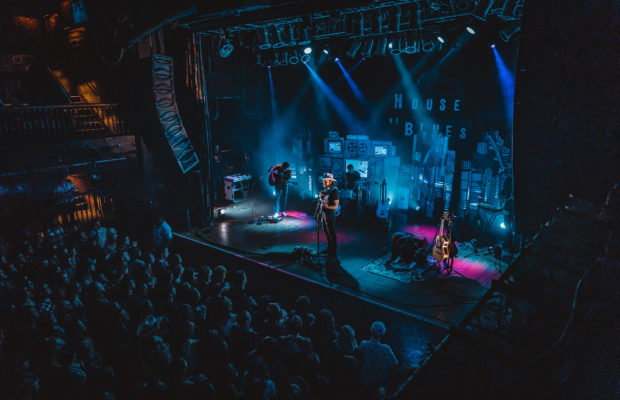 The House of Blues in Cleveland was close to a sell-out Monday for Shakey Graves. The show began with Illiterate Light opening up and getting the crowd energized for the show.  Illiterate Light, a two-person band hailing from Harrisonburg Virginia, created a full sound from an electric guitar and a small stand-up drum kit.

Fans both new and old were treated to a ninety-minute set that made it feel as if it were three shows in one.  Shakey Graves, born Alejandro Rose-Garcia, took the stage alone and began an acoustic set with his guitar, a chair and true emotion for everyone in the near-capacity venue to witness. The highlight of the acoustic beginning was Hard Wired with the crowd singing along, as if the House Of Blues was transformed into a giant campfire.

The middle portion of the show included Alejandro’s band.  Rose-Garcia referred to them as family and it was evident in their sound and the overall “vibe” given off. The band, a recent addition to the Shakey Graves’ persona added dimension and more of a louder, rock while maintaining acoustic roots, a welcome compliment and change to the singer-song writer’s repertoire.  This portion of the show involved more crowd interaction and a few anecdotal stories. The audience erupted in dancing and screaming lyrics during The Perfect Parts while lights strobed, making the music fan feel as if they were at an arena rock concert. The House of Blues quickly filled thereafter with singing and clapping as Dearly Departed, the breakthrough cut off the And the War Came album, quietly began.  Rose-Garcia pulled double duty for this song by singing his part as well as Esmé Patterson’s part with help from the audience.

The final portion of the set including the two-song encore returned to back to a one-man-band sound with a raw guitar with a southwest flair reminiscent of his Texas origins.  Alejandro, much more relaxed and open, shared his inspiration and songwriting stories with the crowd. Alejandro said the inspiration for Cops and Robbers came while in Australia when joking with a local about ‘turning to a life of crime.’  The local then replied “crime is a young man’s game,” and the song Cops and Robbers came about. It was evident what true connections he has with his fans and how much they adore him, his music and the rugged soul each song brings.