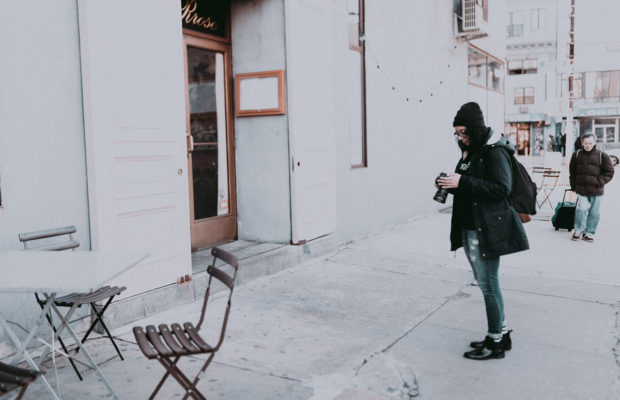 Dabbling in photography through her families Polaroid cameras at a young age, New England based photographer Jordyn Beschel has been photographing the high energy of pop-punk and hardcore shows around the Tri-State area. Now, living the post-graduate life, Jordyn is headed out into the big world to make a name for herself, but not without sitting down with us to discuss her humble beginnings.

As a kid I was always messing with our family Polaroid cameras, later taking out the cool new point-and-shoot and going wild with pictures of flowers and stuff like that. Landscape photography is what really drew me in, though, I think. I loved that how the landscape exists is one thing and what we see with our eyes is another, and then how the camera can confound and moderate that relationship. I got my first DSLR in high school and started exploring more with portraiture. Around that time, I got in touch with an old friend that happened to be in a band at the time and I just started bringing my camera to his shows. I was studying music as well, up until a few years ago, so I felt a strong connection making my two interests become one.

My first ever show was for said friend’s band in my later high school years at this dinky venue infamously known in Connecticut as the “ATC”. It is a very small DIY venue/teen center, but our local scene was pretty strong at the time and could pack in a good crowd (which had me falling over myself trying to shoot mid-moshpit). The pictures weren’t completely awful for what it was. I had a basic fine arts background in terms of understanding composition, but this girl had zero knowledge of Lightroom or the magic of any proper editing techniques. Some advice to my younger photo self–do not become best friends with your flash, you will (almost) never be able to use it again.

My gear game is a little weak, but I love and make do with what I use. I have a Canon 6D body and usually am always using my Sigma 20 1.4. I have a Canon 50 1.8 that I’m about to upgrade, a Canon 16-35 2.8, and a solid Nissin flash. I have a couple Polaroid cameras as well that I mostly use just for leisure, but I rely on my Canon AE-1 for any film projects.

For the most part it seems like you really enjoy the pop punk genre to photograph, adding bands like Against The Current, Real Friends and Underoath to your portfolio. What drew you to that genre of music?

I guess you can say that scene is like my alma mater. I grew up listening to that kind of music, it’s what got me into going to and shooting shows, and a lot of the artists I listen to/work with now still fall under that genre. Pop punk shows are always super fun with a lot of energy to capture, whether it’s from the band or the crowd, and I’ve always been a sucker for a sick crowd shot.

Out of all of the photos in your portfolio, which photo are you most proud of and why? What is the story behind it?

It’ll have to be my shot of Spencer Chamberlain from Underoath’s show on their latest U.S. tour. Underoath is my number one favorite band and has been for well over a decade. I’m not proud of it necessarily in the sense that it’s the best shot in my portfolio, but more proud that I got to accomplish something that meaningful through all this. As cliche as it is, I owe so much of my own perseverance to that band. Getting that shot was such a nightmare, too. It took hours for me to get to the venue thanks to NYC’s glamorous traffic. Then, there was an issue with the press list at the door, we all missed the opener and got our passes maybe fifteen minutes before Underoath was going on. During their set, my lens wasn’t focusing at all, I didn’t notice until halfway through the second song, and I had to switch lenses frantically. The whole time I just kept saying, “I missed the shot!” in my head. Luckily, I came home and pulled everything up, and I still had the shot!

New England is home to some great musical acts in the pop punk scene including A Loss For Words, Vanna, and PVRIS. How is the area photographically speaking? Is there tough competition? What do you do to put your name and New England on the map in terms of photography?

New England has some really great photographers on the map already, but there’s definitely competition. I feel like concert photography in general can be pretty competitive, but I’ve personally struggled a bit more to create relationships/get work in the NE area compared to when I’m around Long Island for example. The music scene in NE is very strong, all of those bands you mentioned alone have made a killing or are continuing to do so, but with the thriving scene you’ve got a ton of photographers trying to strive with them. You not only have to really know what you’re doing and do it well, but you have to be successful at showing that, too. I know I personally have been working on finding my niche and sticking with it. I’ve noticed that just being a decent person, as simple as it may sound, can go a long way, too. Pit etiquette, working with locals, reaching out to bands after shows, stuff like that. I’ve learned that word of mouth (and who you know) tends to weigh things in your favor as opposed to just having a solid portfolio.

You’ve been to a couple of Warped Tours over the years and while it is different from the typical music festival, how would you say it compares to a regular concert in your opinion? Better or worse or just different?

I’ll say just different. It’s better in the sense that I’m not struggling to keep my ISO from hitting its limit, and I can shoot with a lot more ease trying to get that hair flip action shot. Also, I personally love the business of the festival and having to book it from stage to stage (at least that’s what I was doing this year). However, shooting a regular concert tends to give me more to work with in post-processing, even if I’m ready to toss the computer trying to color correct.  I think it really just depends on your perspective because there’s plenty of upsides and downsides to both.

Having over 1,000 followers on Instagram, you seem to use social media to your advantage in order to get your work out there and showcase it to people. What role would you say social media plays in your career and what are the benefits and drawbacks?

Social media is wild, but it is undoubtedly a crucial tool in marketing, and especially in communicating with other photographers. Instagram specifically has been a great tool because it can be like an ever-changing portfolio, but everything has its setbacks. Instagram, for example, now has that awful algorithm that prevents a lot of artists from getting the visibility they deserve without having to pay for advertisements. Social media in general can also just be really toxic, and I’ve found myself even getting a bit obsessive with how I present myself to others and who’s paying attention to my work. I think at the end of the day, if you want to use it for work, keep the mindset that you’re using it for work, and it can definitely bring about great opportunities.

Don’t ever be afraid to reach out to someone for help. If you like someone’s work, tell them, ask them what works for them and what doesn’t. If I’ve learned anything up to this point it’s that every photographer is learning along the way, too. Even some of the most established in the field are looking for something new to add to their bag of tricks.