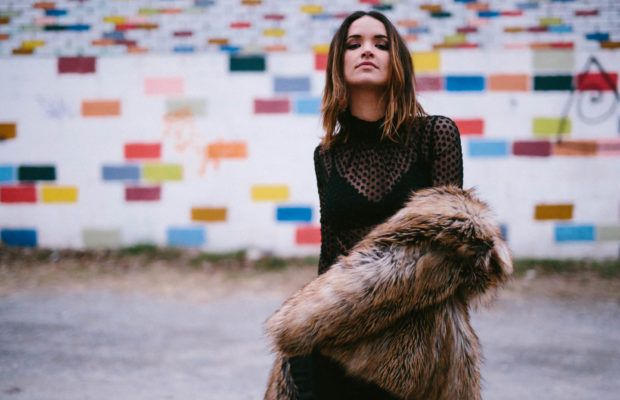 One of our staff, Emily May, got to catch up with Liz Huett about her newest single, her inspiration, and her life as a solo career artist. See their Q&A interview and her new music video below!

Congratulations on the release of your debut single “STFU & Hold Me”!  How does it feel to have your song at #3 on the Spotify US Viral Chart?

Thank you! So surreal. Pinch me, please.

I read that you co-wrote the song with your producers, The Futuristics, who have also worked with artists such as Halsey and Selena Gomez!  How did you come to work with them and what has that experience been like?

My A&R had the idea to have us collaborate because we were so different in important ways, he felt like their pop production and writing style would compliment as well as challenge my singer songwriter tendencies to potentially create something fresh… I took his suggestion and after one session I was like “These guys are the shit, get me in with them everyday please.”

Where do you derive your inspiration from when writing songs?

My heart. I write what I’m going through… what I feel inside. Some people are good at telling stories from a third person narrative, I’ve found that my best material so far comes from me telling my raw truth. Good, bad, ugly… I just write my heart out and hope like hell that the honesty resonates with someone.

Who were your musical influences growing up?  Did you grow up in a musical household?

Nobody in my household growing up was musically inclined whatsoever. But my older brothers always blasted music when they had people over or were cleaning their rooms or washing their cars in the front yard on weekends so I was exposed early on to the effect of a good song. Honestly my biggest musical influence was the radio. I had my ear glued to it. Everything from Garth Brooks to Weezer. I was always obsessed with songs, the way they make you FEEL something, make you want to dance, want to cry, providing comfort and nostalgia at the same time.

You grew up in California but currently reside in Nashville.  A lot of musicians tend to gravitate towards Nashville.  What do you think it is about that particular city that musicians find so appealing?  What led you to decide to move there?

Nashville is a magical place. There is so much raw talent and so many great songwriters and musicians on any given street corner, it’s absurd. After high school, my gut (and God) was telling me to move to Nashville. Looking back it was insane that my parents let me, especially considering the rad music scene in LA…it would’ve been easier and less risky for me to just move an hour away from home and chase the dream nearby but I’m so glad I listened to my heart and took a detour through Nashville in my 20’s because it has shaped me so much as a songwriter and an artist in ways I’m really proud of. Can’t take the Cali out of the girl though, hence my sound. 🙂

What was it like for you to be given the opportunity to be a back up singer for Taylor Swift for 3 years?  Do you feel that experience helped you to learn the ins and outs of the music industry?  Do you feel that it helped to prepare you for branching out on your own?

It was the most amazing adventure and the best music industry education a girl could ask for. I learned so much, laughed my ass off, formed some priceless friendships and saw first-hand the astounding power of music and how connects us all.

Hands down, my biggest struggle has been my inner critic. And my biggest accomplishment is telling it to “fuck off” 🙂

What do you like to do for fun when you have time off?

Hang out with my hilarious, amazing friends. And try to see my sweet family as often as possible. Life is short, you know.

Who are some of your favorite musical artists right now right now?  Who are you listening to?

I’m listening to the new Kesha record a lot at the moment. Still wearing out Ed Sheeran’s entire Divide record. Mayer’s recent tunes “Never on the Day You Leave” “In the Blood” and all things Rihanna frequent my playlist. Never excluding, the timeless, Tom Petty.

Is there a particular musician or band that you are dying to tour with in the future?

Touring with Ed Sheeran, The Killers or P!nk would blow my mind.

Some touring to promote the single and preparing to release the second one. Finishing up an EP and wood shedding with my awesome band in California. Exciting stuff for sure. Please don’t wake me from this dream!