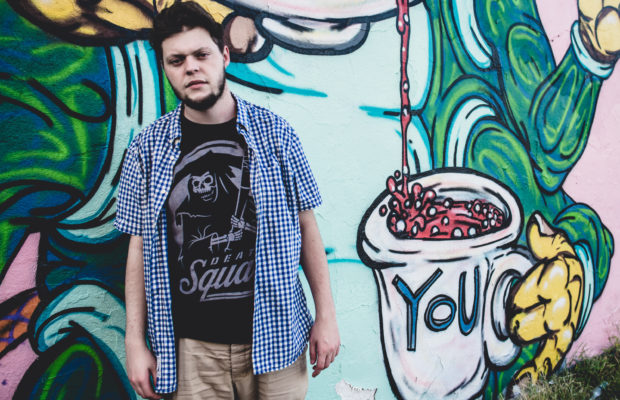 Refusing to stick to just one genre of music to shoot, photographer Jake Lahah has a unique portfolio that spans across a number of areas. Photographing bands such as The Devil Wears Prada, Cage The Elephant and Zedd over the years, Jake opened up about why photographers should never stick to just one music genre and why even the most expensive equipment won’t make you the best photographer.

I started showing an interest in concert photography when I stumbled across Underdog Press and my good friend Carol Simpson gave me the opportunity to shoot for them.

I’d say a bit of both. I’ve taken a bunch of film classes throughout high school and some digital photo related classes. I’m currently a printmaking major at George Mason University, so I’m always discussing what the quality of a photo means and how you can justify editing and color choices with printing. I’d say those skills have definitely heavily influenced how I edit, how I think about concert photography, and where I classify it on the spectrum of art. As far as learning how to digitally take photos and edit, it’s all been self-taught and through practice.

A lot of young photographers have a mindset that you need the most high-end equipment to achieve the best photos. Do you agree with this idea?

Not at all to be honest. So many people kind of push this idea, but I’ve seen so many talented photographers shooting with more standard/kit cameras and lenses that it blows my mind. I don’t think there’s any reason to think that using a lower profile camera means they aren’t a good photographer. It can be a really cool tool to kind of build up a visual aesthetic that is lower resolution and grittier.

The first show I ever photographer was the All Stars Tour in 2013. It was at this old grungy venue called Empire that had like no lighting whatsoever and no barricade as well. It was a rough show and my shots weren’t the best that I’ve done, but I got a semi-decent photograph of Jonny Craig from Slaves and that’s all that mattered to me that night. I was hooked immediately.

I believe it did at first. I was a huge metal head and all I really wanted to do was shoot the metal-core genre. As I began to move away from the pop-punk/metal community, I started to notice I was really attracted to production and visual appearance and that made a huge influence on who I shot.

I think doing that helped define who I am as a photographer and what I am willing to go out and photograph. Of course I still want to photograph artists I like, but just because I’ve photographed an artist six or seven times doesn’t mean I need to catch them again. I’d rather save the time and find an artist that is more engaging or interesting that I haven’t shot yet.

Not organized. Lol. I don’t really know if there is a way to describe my style. I like wide shots just as much as I like up close shots. I like high contrast as much as I like the low-contrast film look. All in all, if my style of how I edit the photo fits the means of the image or the content of what is going on, then I’m happy about it.

I think not having a style is good too because it really gives you the full creative control to edit and look at yourself and say, “Hey, I’m trying something new. Maybe this will work out and I will like it?” I think discovery is key for photographers.

This is always a hard one especially after some of the shows I’ve shot over this summer. I’d have to say this photo of Galantis I took back in February.

This was my very first paid gig (which I didn’t even know was a paid gig until about two hours before doors). My friend Cara Bahniuk posted on Facebook the day before asking if anyone was looking to do a shoot the day of the show. Turns out she knew Galantis’ tour manager from high school so he hired me for the night to shoot their DJ set at Echostage in D.C. I was in complete shock because my first paid gig was in front of a sold out 4,000-person crowd. I specifically remember thinking to myself, “Who gets to ever say that their first paid gig was in front of this large of a show?”

Galantis ended up liking all the photos, but they seemed to post this one of them holding the flags the most so I kind of gravitated towards this one.

In a way yes, but I think my work speaks beyond something other than just my editing process. I try to separate myself with being open to photographing as much as I possibly can while still having a voice. It’s one of those things where I want to be opinionated and sort of promote artists that I think are doing things that are different or have an avant-garde edge to them. I want to focus on creating an image where people get to know me and know what types of artists I like and what I like to photograph.

I honestly think that is the best way to stand out because you can still be diverse and photograph all these different artists across a wide range of genres, but still give yourself an edge as to what artists you are willing to work with and to let people know that you are in the know of the music industry. I think that’s way more important than how good you are as a photographer.

Don’t stick in the Warped Tour/Alternative Press community. Don’t stick and stay in ANY community for that matter. It’s so important to branch out and try new things and it’s often extremely difficult to get out of that branch when it comes to wanting to fork out to different genres.