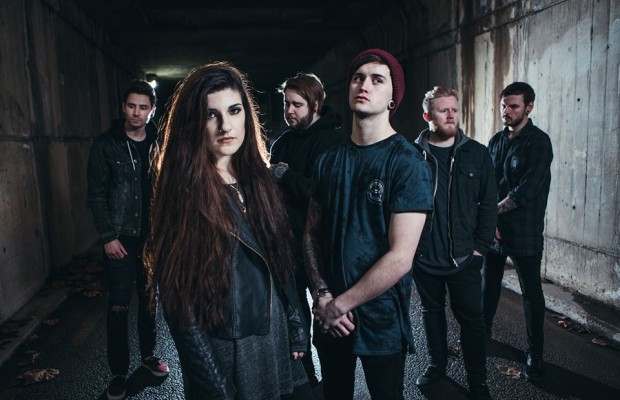 After dropping their debut EP, All We’ve Ever Known, this past month, UK metalcore band FAULTLINES are entering the music scene with a fresh, hard hitting sound and powerfully written set of songs. Guitarist Benji Wilson recently spoke with Stitched Sound about how the six-piece band formed and spilled everything you need to know about All We’ve Ever Known.

It basically came about after the separation of our old projects. We all had loads of material and wanted to explore different routes within the metal genre while still being accessible. After trialing a ton of vocalists, we got in touch with Christina, after seeing one of her YouTube covers, and it all developed from there.

Your debut EP, All We’ve Ever Known, came out on April 15th. Were you guys able to achieve all of the goals you set out when the production process for the EP began?

Absolutely! With the band being from different parts of the UK, we had to do massive pre-production on the record with everything being recorded before we entered the studio. While we were there, we were able to develop the strong foundations that we already had and Daniel Kerr did an amazing job!

Since it is your first EP, did you feel any pressure when it came to writing and recording?

This first release is generally the most important one you can make. We spent a long time perfecting everything so the pressure was on as we had a deadline on studio time, but it all worked out well in the end and we’re all extremely proud of the record.

What is the typical writing process for you guys like?

Benji will demo the whole instrumental track and then we send it over to Jake & Christina to add their vocals. A few tweaks are needed, but that’s generally the whole process.

Where do you draw inspiration for writing and record (i.e personal experiences, other artists, etc.)?

The majority of the instrumental writing was just from listening to various forms of music. There are a lot of pop influences mixed in with the heavier stuff, as well as using lots of synth effects to add layers to the music. Artists such as Tides of Man, Explosions in the Sky as well as the big metal bands in our genre, Amity Affliction, Of Mice & Men etc. all influenced the writing hugely.

What do you hope listeners/fans take away from this EP?

I just hope the fans dig what we’ve created. The whole message behind the EP is that we put everything we’ve got into this first release. We’ve all been in bands collectively from a very young age so it’s about us all having a mutual connection to creating and playing music.

There does seem to have been a major decline in attendance at shows so I’d love to see some action in order to change this. Go support your local scene! The future of unsigned bands & your favourite venues depends on it.

Can fans expect to see Faultlines out on the road this year?

For sure. We have many announcements coming soon!

Their debut EP, All We’ve Ever Known, is available now.